In November last year, Google finally implemented a long awaited feature in Google Now for sports fans in Australia – Google Now tracking for Rugby League and Union – and with the Rugby Union season starting tonight and the start of the Rugby League season coming up in early March, those cards are about to get useful.

To make sure Google Now is delivering you the best information about your team, it’s best to make sure your cards are setup is ready to go before the games. To ensure that your teams for each code are entered in, load up Google Now, scroll to the bottom abd select the Magic Wand icon :

Once you’re there select Sports Teams. If you’ve already entered in your teams you should see them displayed there : If not, select ‘Add a team’ and enter in the name of your Rugby Union or League team.

After that you should begin seeing cards for your team which includes the time and date for the game – Tap on the card and you will be taken to the Google Search Knowledge box for the card – tap on the three dots settings menu and you’re asked if you’re interested in your teams Games :

Select Yes and you can choose to hide the scores, select No and the card is removed. 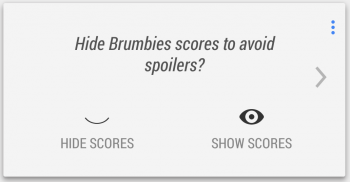 At this stage it’s only Rugby Union and Rugby League, unfortunately no A-League, AFL or other sports like Cricket, Netball or other great Australian sporting interests but the appearance of one, could mean that the others are soon to follow.

Still hanging out for AFL!

You’re just a closet netball fan are ya? 😉

Ditto. I’m hoping that they’ll bring it out before the actual season starts.