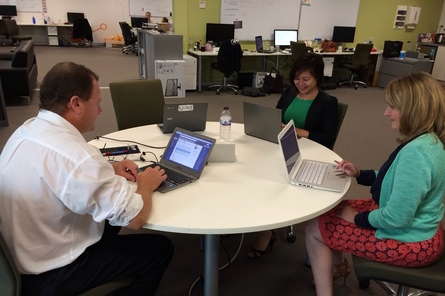 Woolworths is currently undertaking a large technology transformation project which will see Google’s Chrome OS devices account for 85 per cent of business devices being used by the supermarket giant’s staff, replacing the majority of the company’s current Windows devices.

Woolworths’ acting CIO, Damon Rees, has stated that in an interview with Computerworld that “We are currently trialling several types of Chromebooks and Chromeboxes to identify those most suitable for our environment.” Between the company’s technology and business teams, they currently have around 500 Chrome devices.

Woolworths originally announced 12 months ago that it would transition to Google Apps and Chrome and Rees has stated that migration is part of a larger transformation program within the company.

Rees has stated that:

“Overall the program will replace a legacy Microsoft Email platform with Google mail, introduce richer collaboration features using the broader Google Apps suite, and replace a legacy Windows XP desktop with a far superior Web-based desktop delivery method using Citrix.” and “This will provide our users with greater options in device choices including ‘bring your own device’ and Chromebooks.”

Rees continued to state within the interview that:

“Embracing a Chrome device strategy in an enterprise setting has been made possible with recent advances in Citrix with its web-based delivery technology, enabling Woolworths to make the transition from legacy thick client application access to cloud like browser based delivery,”

Currently the company is also trialing and testing Chromeboxes for videoconferencing meetings, a feature which Google recently announced as part of a wider push into the enterprise marketplace. The transition to Google Apps and Chrome has paid off as well, according to Rees:

Google, Citrix and Chrome together meet these aims, as well as simplifying our support and administrative processes, whilst simultaneously reducing our IT infrastructure costs.

We here at Ausdroid are excited to see an Aussie company trial Google’s Chrome OS devices to see how they will work within their business and hope to see more Aussie companies take part in these trials soon.

Most business use cases do not require a honking big PC with a bloated kitchen sink insecure OS? WOW! Who knew?

I wouldn’t bet that they’re abandoning all their existing Windows based applications. It sounds like they’re using Citrix heavily so the Chromebooks are probably being used as thin clients to access Citrix. Possibly not as radical as it sounds.

I would kill for my employer to do what Woolworths is doing. The money and time that could be saved…

Depends on what the staff are doing.
If it’s largely web apps… database access, filling out forms, email, then it makes sense.
Only people who seriously need MS Office or Photoshop need a full PC.

It doesn’t have to be a 100% conversion. 85%? They’ll probably adjust that percentage when some staff complain, but that sounds like a reasonable number.

Personally I think they should have stuck with Windows. That’s just me though.

This is an interesting development. Google’s strategies aren’t immediately obvious at the beginning (at least to me) but over time they make sense. First they make Gmail. Then they get companies to replace their expensive MS Exchange infrastructure with the Google managed email solution. Then those company Gmail users start using Google Apps more and more as an alternative to Windows, mainly due to the ease of sharing documents. Then they can more easily replace Windows with Chrome OS. Then Microsoft looks around and notice that Google has killed Exchange, Office and Windows.