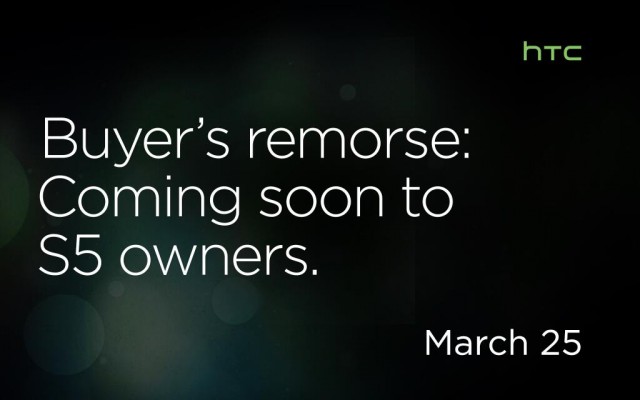 Samsung unveiled the Galaxy S 5 at Mobile World Congress earlier this morning, and HTC’s social media team immediately took to Twitter to cash in on the buzz for Samsung’s new device with the (admittedly pretty funny) image above.

Nokia pulled a similar trick last year when Apple announced the iPhone 5c, which gave us all a few laughs, but it definitely paid off for them. Nokia’s ‘Thanks, Apple’ tweet amassed a whopping 40,000 retweets and was lauded as one of the most successful marketing tweets of all time

Unfortunately for HTC though, they jumped the gun a little – the Galaxy S 5 doesn’t go on sale until April 11, which is a few weeks later than HTC’s One announcement. It’s not the first time that HTC’s attempts at poking fun at Samsung over Twitter have backfired though – they tried it last year after taking home the ‘Hottest Phone of 2013’ award at the Mobile Awards, but ended up just looking bitter and petty.

Would you buy the Galaxy S 5 if it were available today, or would you wait to see what HTC have up their sleeve? Let us know in the comments.

I’m waiting till March 25.. always been a HTC fan, but if whatever they release hasn’t got a better camera (iPhone 5S camera still s**ts on the HTC One’s) and IPX7 waterproofing… I might jump ship, but not to Samsung… but to Sony.

I can’t upgrade until June so I’m forced to wait. Not sure about the s5 .. Looks great but if HTC brings the n expandable memory I might just sway.

This one has to be my favorite

That happened to me as soon as got my S4, I have been disappointed with it since the day I got it, my favourite phone I ever had was the original htc desire, From my experience with with many samsung products they fill them with gimmicks that don’t work 100% to try and get more sales