Home Mobiles LG on staying ahead of the curve The humble mobile phone has been around since the early to mid-80s and, since its introduction as a super large brick shaped device, it’s seen many design iterations. But the design has been obsequiously slabbish since the launch of the iPhone back in 2007, with a blank rectangular glass face, but LG is trying to change that with their latest big phone to launch in Australia – the LG G Flex.

The G Flex was announced back in late October, around the same time as another curved phone – the Samsung Galaxy Round – but while the other phone has seen limited release and mostly been seen as ‘bending the wrong way’, the G Flex seemingly offers a much better shape and design that enables the curve rather than simply releasing one for the sake of it.

With the release of the G Flex in Australia, I took the opportunity to speak with LG Australia’s Josh Corin and Brad Reed about the G Flex, and to get some background on the design and future plans for the technology behind it.

To start with, LG has designed the G Flex from the ground up as a curved phone, integrating a curved P-OLED (Polymer-OLED or Plastic OLED) screen with materials that have been designed to flex. This marriage of parts allows the phone to be put under pressure that most normal phones just crack under. And it’s this party trick that is the number one request you get from people when you show them the G Flex. But it’s not just a design for design’s sake, although being able to flex the phone flat is a pretty cool trick, there’s other benefits to the curved design of the G Flex.

Firstly, the curve of the phone naturally conforms to the face, bringing the phone’s speaker and microphone closer to the ear and mouth when speaking on the phone.

As a secondary benefit, the curved screen is also a shape that we’ve been seeing in movie theatres for many years and in the design of very high end televisions, both of which seem to offer a superior viewing experience for movie watchers.

The whole idea of a multimedia phone is further enhanced by some very cool software enhancements to the UI. If you hold the G Flex in landscape and use your thumbs to slide out from the middle – like drawing the curtains back at a theatre – the phone loads straight into a multimedia app to view videos or YouTube.

As a company, LG is uniquely positioned to attack a large number of the challenges faced when talking about creating a curved (and flexible) phone like the G Flex. Both the LG Display and LG Chem (battery) departments worked overtime on this one: LG Chem used their stepped design, to a fit 3,500mAh battery into the space available. I have hammered this phone battery hard over the last week to get on average a full day and a half out of before I can kill it. The screen is also a delight with the 6″ 720p screen actually looking extremely bright and friendly to watch movies on, my initial apprehension at the low PPI and resolution has been won over mostly by this screen.

However, it wasn’t all smooth sailing when designing the G Flex. LG dealt with some challenges during the design and construction of the G Flex which eventually lead to one of the coolest features on the phone, one that I at least hope will will appear on future devices – the self-healing back. 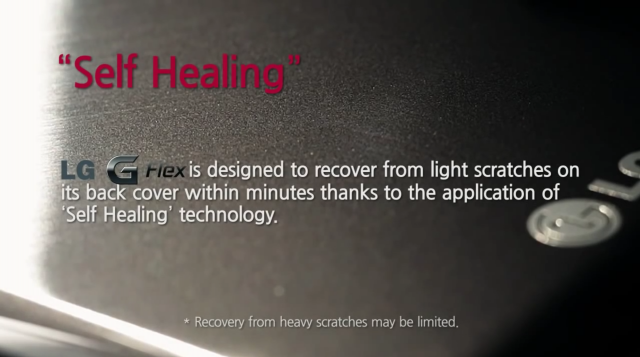 When in the design stage for the G Flex, LG found that the phone was showing signs of wear in the centre of the device, as this was the main contact point when laid on a desk. To address this, LG created this self-healing back plate, and it really works! Not only does the phone heal itself from the minor wear it receives when sitting on a desk, it also heals general wear and tear from the scratches a phone gets simply by being in a pocket with change, keys and other cruft.

LG has shown off the two durable parts of the G Flex – the curve and the self healing back in a video:

If you want to check out the phone in person you can of course check it out at Harvey Norman. LG has given Ausdroid a G Flex for review, and that full review will be up next week, but first impressions are good.

Have you got anything you want tested on the LG G Flex? Let us know.

i just happened to bump into daniel at the local shops and he had the G Flex on him, i liked the phone alot, i think its worth the $999. i think its time for a new phone =)

wish next nexus 5 is curved. this makes 5″ more accessible, so user can reach the top of screen much easily 🙂