Ashton Kutcher was recently brought on board the Lenovo team when they launched the Lenovo Yoga tablets, where he was named as a product engineer for the line of tablets and according to Lenovo Chief Marketing Officer David Roman, he’ll continue this role with a line of Lenovo smartphones to be launched later this year.

At the launch of the Yoga tablets, Kutcher stated that ‘I can’t wait to dig in and help Lenovo develop future mobile computing products.’ and in an interview with re/code, Mr Roman describes Kutcher as truly believing in his role as a product engineer for Lenovo, saying

I know on one level, it sounds corny, but it is real. He not only sees himself as an engineer, but he is an engineer. If he sees a problem, he wants to solve it.

Kutcher is definitely interested in tech and has some technical background having studied biochemical engineering at the University of Iowa before launching into a modelling, then acting career. He also has a keen interest as a venture capitalist, investing in tech companies such as Airbnb,Foursquare and Uber as well as being on the advisory board for SB Nation – parent company of tech site’s The Verge and Polygon.

It’s assumed the Lenovo Smartphones will run Android given their current lineup and whether Kutcher, who still chooses to use an iPhone according to some of his recent tweets has the right stuff to design an Android phone is still in doubt, as is the question of whether he’ll use one. 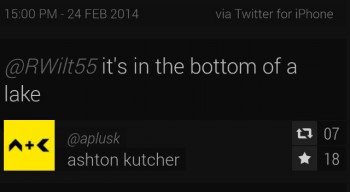 He wouldn’t be the first to endorse a smartphone platform while not actually using it, Alicia Keys was caught tweeting from an iPhone soon after her appointment as Creative Director for the company, Jessica Alba was caught using an iPhone after agreeing to spruik Windows Phone and even LG Australia had issues with Erin McNaught who was contracted to promote the original L Series phones failed to stop using her iPhone.

Whether we see Lenovo smartphones in Australia is also undecided, we have yet to see them here in Australia with carrier support, although actually importing them is quite easy, with companies like DealExtreme even having an Australian arm ready to ship you any number of Lenovo phones.

So the question has to be asked – do you want a Lenovo Android phone and then do you want one designed by Ashton Kutcher?

I would rather a not so famous person who can actually provide an outstanding innovative touch than someone who wouldn’t understand the Android ecosystem nor deal with Android in a day to day situation.

I like the irony of Kutcher having played Steve Jobs. I totally expect Lenovo to copy the iPhone!