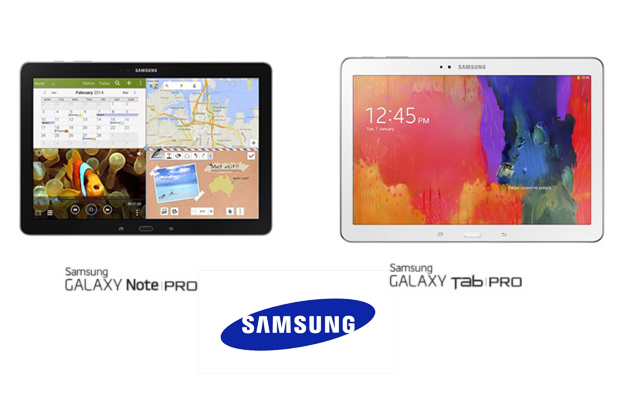 Announced in January this year at CES in Las Vegas, Samsung Australia has just announced that their long awaited Galaxy NotePRO 12.2 and Galaxy TabPRO 10.1 tablets will finally be launching in Australia.

When announced at CES there was a single NotePro with a screen size of 12.2″, but three TabPRO tablets with screens ranging from 8.4″, through 10.1″ and up to 12.2″. All four of the tablets announced came with a high resolution 2560×1600 resolution screen. Of this range of tablets announced, Samsung Australia has decided to release only the NotePro 12.2″ and the TabPro 10.1″ leaving the market open at the smaller end of the tablet market for their Galaxy Tab 3 7″ and 8″ as well as the Galaxy Note 8.0.

The NotePRO and the TabPRO are the higher end versions of the current Galaxy Tab and Galaxy Note line with Arno Lenior, Chief Marketing Officer saying

The GALAXY NotePRO and TabPRO tablets are beautifully designed devices that will deliver a premium experience for Australians seeking a great content and multimedia experience on an amazing screen. These new GALAXY tablets can provide a great tool in a professional environment, while being an excellent entertainment device for the home or when people are travelling.

Samsung is including an ‘Ultimate User Content Gift Package’ with both the TabPRO and the NotePRO, the package will contain premium apps and offers from local and international partners. The package includes :

Both tablets are considered ‘premium’ and the pricing reflects this, the NotePRO with its Wacom Digitiser moreso, the Galaxy NotePRO will be sold for a RRP of $1,099 for the 32GB Wi-Fi model while a 32GB LTE Model will be sold for $1,249, both models will be in stores this week. The TabPRO will be available in a 16GB WiFi model for $599, and will be available this week, while the LTE model will sell for $749 when it arrives in stores next week.

That’s disappointing they chose not to release the 8.4 version. I’m sure they will release it later as a 8 month old product.

The official accessories will also cost a ton. Not a problem if your rich.

derp
Reply to  Me

Some iPad models have been over $1k for a while now and that hasnt stopped many from getting them. They might hit a niche with them but I dont think they will especially with its small onboard storage.

Does it specify what colours will be available?

No. I replied as soon as they announced it asking for colours but so far no reply.

At those prices, im not sure who will buy them. Guess ill just stick to my nexus 10

I agree, moronic pricing. I’ll get Sony Z2 or wait for Nexus 10 update.