Home Mobiles Oppo wants to “Raise the bar” with the launch of the Find... 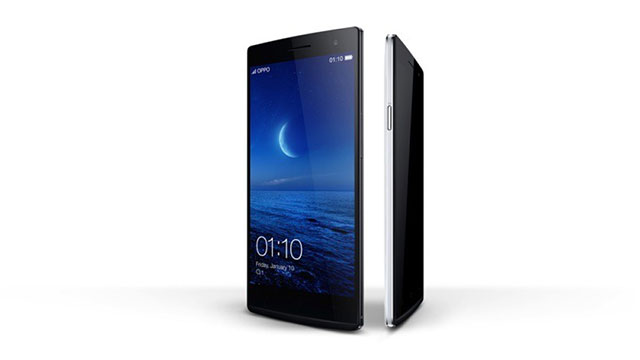 Oppo has just taken the wraps off its brand new Find 7 smartphone at a presentation in China this evening.

The Find 7 is the followup to the company’s well-regarded Find 5, one of the first Android-powered phones to feature a 1080p display. In terms of pushing technological boundaries then, the Find 7’s got some big shoes to fill — fortunately, Oppo isn’t backing down from the challenge.

Confusingly (actually, thankfully), the Find 7 isn’t a 7-inch smartphone. Instead it’s more of a Note-class device with a 5.5-inch screen. That screen is actually something pretty special, too, packing in a QHD resolution — that’s 2560 x 1440 pixels, at a density of 538ppi. It’s protected by Gorilla Glass 3 and Oppo says it can be operated with wet hands.

Behind this ground-breaking screen you’ll find a 2.5 Ghz quad-core Qualcomm Snapdragon 801 MSM8974AC, 3GB of RAM and an Adreno 330 GPU. There’s 32GB of storage built in, and an SD card slot for expansion. Power is provided by a 3000 mAh battery and the whole thing comes in at a pleasant 173 grams.

If the massive QHD resolution is a bit too much for you, the Find 7 will also be available in a cheaper variant with a 1080p display, a slightly lower spec internals (2.3 Ghz MSM8974AB with 2GB RAM, 16GB storage and a 2800 mAh battery) and weighs a whopping 3 grams less at 170 grams. Both models will feature 4G connectivity

Front and back – white and black

Oppo’s moved the notification light from its traditional spot at the top of the display to the bottom of the front face of the phone, where it now forms a bar that lights up as seen above. Its unknown whether apps will be able to exert full RGB control over it.

Running the show, you’ll find the latest iteration of Oppo’s somewhat middling Color OS, now sporting a version number of 1.2. We haven’t heard about support for CyanogenMod for the Find 7, but given the CM team’s alliance with newcomer OnePlus we’re not expecting special treatment for Oppo’s new baby.

It’s a bit difficult to make out in the photos above, but it also seems that Oppo’s sticking to the capacitive buttons over Google’s preference for on-screen software buttons. It also seems like they’re sticking with a hardware menu button, although custom ROMs will likely make this button do something else very easily. Find an enhanced version of the “Notification light” photo below, clearly showing the capacitive buttons:

Oppo is looking to continue its reputation of producing quality cameras in their smartphones. They’re rather proud of the camera packed into the Find 7 – the rear camera is a Sony “EXMOR” IMX214 CMOS with na F/2.0 lens shooting at 13MP. As with other 2014 flagships, it’s capable of shooting 4K video and can shoot slow motion at 720p in 120 frames/second.

Oppo is also playing up a shooting mode called Super Zoom which it says takes 10 photos “at the backend”, and stitches them together to form a 50MP image.

The front camera is a 5MP unit, continuing a trend we’ve seen in the last 12 months from manufacturers like Huawei and OnePlus. It’s sure to be selfie-friendly.

Oppo hasn’t just focused on the optics in the Find 7, bringing in “Grammy award winning” technology named “MaxxAudio Mobile”. We’re not super familiar with MaxxAudio, but its technology has been used in a few Asus products of late.

According to the Maxx Tablets and Mobile site, it “increases dynamic range, frequency response and imaging, with maximum transparency, clarity and natural sound”. Sounds pretty good to us, but we’ll reserve judgement for a review unit.

It’s claimed that this technology will allow the battery in the device will recharge to 75% of its capacity within 30 minutes – something we’ve seen “in the works” from the industry for a while now.

The generous battery capacity paired with Rapid Charge technology should keep the Find 7 going for a while, or bring it back from the brink quickly.

A 30 minute charge will get the Find 7 to 75% of battery thanks to the Rapid Charge technology. #Find7 #RaiseTheBar pic.twitter.com/8mfVsHjO2s

It looks like the Find 7 will be available in black or white, although in a rather Nexus-like move it seems the colour variants will only apply to the rear of the device – judging by the header image, the front face of the phone will always be black.

If you’re looking to get into the QHD game with the Find 7, you’ll be a little disappointed. The Full HD version will be the first to market, going on sale tomorrow. Oppo’s less specific when it comes to the QHD release, quoting May-June.

Are you interested in the Find 7? Will you go Full HD or wait for the QHD model? Let us know in the comments!

sound matters to me, and in this day and age with mp3s and poor quality audio, maxaduio helps bring it back to life, and to have that available to me in a phone now sounds great.

They should raise the bar by making a smaller top end phone. 4.5-4.7″ 1080p with the same CPU/ram they have in the QHD would be a fantastic phone.

I hate having to choose between stupid overspecced vs unnecessarily derated little brother.

It just sounds ridiculously specced up. Which sort of worries me rather than excites me. It’s a sign of a design that hasn’t worried about heat, battery usage, stability etc. No sign of restraint for practicality.

That might be unfair, it’ll be interesting to see how it reviews.

From engadget, “you apparently won’t have to worry about potential heat issues while charging, as the Find 7 is built with five layers of thermal protective coating, and the solid titanium-aluminum alloy frame — crafted with nano-injection molding — also helps dissipate heat”

At $530 for the full HD version that’s quite a bargain and a match for the nexus 5 when it comes to sheer value!!!

Cheaper than the Moto X and a number of flagship phones.

Nice looking too, reminds me of some older Sony Ericson Xperia models. It even uses a Sony camera.

Unfortunately, it won’t get an official aussie release.

If I can truly snag the QHD model for under $650. They’ve definitely got a potential customer.

Wow I’m really impressed. If only this came in stock vanilla android and you could compromise only the screen to 1080

On another note, do you still do app of the days? There’s no link anymore!