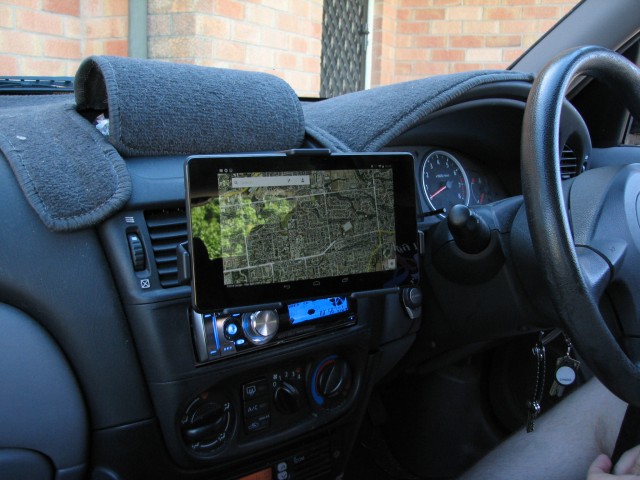 There’s a plethora of mobile accessories out there nowadays. As you’d expect with an industry as huge as mobile telecommunications, the accessories range from the cheap and nasty, to “budget concious”, high quality, impact protection, style/professionalism to the completely ridiculous! You’ve also got to contend with branches of accessories for devices, not getting accessories if you purchase a device that’s too “budget concious” to start with as well as the potential of getting caught out with some poor customer experiences.

The increased awareness of mobile technologies by authorities is making it increasingly risky to use your device while driving, but if you want to use your phone as a GPS or use your tablet to Bluetooth link to your stereo in your vehicle what’s the right solution for you?

HoldMyPhone have a mobile device mounting system from ClicOn that

The system relies on 2 components, a dashboard mount and a device holder. The Dashboard mount is specific to your vehicle, so it’s important to ensure that you’ve got the right mount for your car, noting that some cars from one year to the next require a different mount due to cosmetic changes internal to the vehicle. In the dash mount packet you’ll get what looks like a small plastic spatula which is how you manipulate the dash (very gently, particularly if your car is a little on the old/sun damage side as plastic dashes become brittle) and insert the clips into their holding position.

Once the mount is in place, you can then screw on your desired device holder. In my case (for the purpose of this review) I’ve got the 2013 Nexus 7 mount to show on camera the mounting brackets and how the device clicks into place more easily which, as you can see from the video below is very easily done. To remove your device from the mounting does require a small amount of force to lift the arm that holds it in place, but this adds to the security of the holder in that the device won’t bounce out accidentally as I’ve had in the past with a “drop in” holder for my phone.

While getting the mount into place is a little more fiddly than other in car mounting systems, this is easily one of (if not the) most stable mountings I’ve ever seen for mobile devices in car and there is virtually zero chance that the system will accidentally or unexpectedly come dislodged from your dash. The fact that they have such a wide range of dash mounts for vehicles of all ages, brands and models is a huge plus for the ClicOn system and shows that they’re not a fly by night cowboy company looking to cash in on the mobile telco success at the moment but a well thought out company with plenty of range to suit a broad client base.

There’s really only two gripes I have with the system. The first one, and this is certainly subjective, is the price. Coming in at $49 for the dash mount that’s appropriate to my car, I can buy several of the cheaper branded windscreen mounts for the same or less, then you need to add the device holder which (for the Nexus 7 2013) varies from a further $69 right up to $137.50 for the all singing all dancing, charging system included in the mount; so it’s far from a cheap option. If you’ve recently acquired a new device or a new(ish) car that you’re planning on keeping for some time, you can easily change the device holder on the system so it’s a great option for a long term solution particularly if you spend a lot of time in your car.

The second is that because the device holders are quite tight it can be a little difficult at first to get the device out. So much so that if you’re not careful the pressure and rubbing on it could (long term) cause rubbing and wear marks on your device, something to be wary of but not a deal breaker in my book for the functionality and security that the ClicOn system offers user.

In the time I’ve had the system in my vehicle my beloved Nexus 7 has become even more of a daily use case for me running GPS and music in my vehicle. I am actually that taken with the mounting system that I am very realistically considering purchasing it from Hold My Phone rather than returning it. Given how critical I usually am of accessories, that give an idea of how impressive I have found this system

Editors Note: After the completion of this review, the supplier offered for the reviewer to keep the goods. The offer was made after the review was written and submitted to editors, and has not influenced any of the views given.

Is the HoldMyPhone mounting system something that catches your attention? Will you look to invest in the system for your vehicle? Or do you have another mount that you just can’t bare to part with?

Do you seek finance to set up your own business?
Are you in need of private Use,,,,,
business loans for various purposes?
Do you seek loans to carry out large projects/Real Estate
Do you seek funding for various other processes?

I’ve had one of these for 3 years, used on my Alfa 147 with an iPhone, Samsung GS3 and Nexus 5. I chose the adjustable iPhone holder which both allowed me to use it with a case, and allowed me to adjust it to fit subsequent phones. IMO $100 is definitely good value to have something this safe, sturdy and functional. My only complaints are the clip attaching to the dash can break if you attach and detach it enough times, and the device holder faceplate screws need regular tightening to keep the right amount of grip to the ball… Read more »

this is just like the brodit range. High quality but specific to car AND handset/tablet model = 100+ per device per vehicle, if you upgrade the device, that’s another 50+.

Did anyone notice how the dock covers emergencyflasher lights button? I would *never* consider a dock like this dock for that reason alone. Also, I don’t believe that Australian car safety regulations would allow this dock to be used in Australia.

I purchased one of these Holders for my Nissan Tiida and GSIII and it lasted only just 18 months. The clip that holds the holder to the dash of my car simply snapped off one day. Upon further inspection, it is only a VERY small lip of plastic in this case that hooks into the air vent on the dash. I also constantly had issues with the screw connecting the Vehicle side to the Device side coming loose resulting in my device flopping around all over the place. Was almost as if the USB plug wasn’t quite in the right… Read more »

Phil, IMPORTANT info missing from your writeup.
The device holders themselves are just as make and model specific, as are the vehicle mounts for the device holders. If your device isn’t listed, then you won’t be able to try to use the system.

I disagree Jeni, that’s pretty clearly set out in the review.

I picked up on the fact the device holders are device specific the first time I read the article. I suppose it could be made more “slap you in the face” obvious with a statement like “The device holder is unique to each handset or tablet.”, but I’m not sure that’s necessary.

I personally went the cheap option of Sticko for my Nexus 7, but I can certainly see the appeal of this system. Sticko has a problem with the Nexus being angled too high so it reflects the sky back, making it very hard to see the maps while driving.

If I spent more time driving I’d be very tempted by one of these simply to fix that single issue. It’s surprising how quickly that gets annoying!