Aldi’s special buys which begin on Wednesday next week include a variety of electonics, TV’s, Windows tablets as well as two Android products to peruse, an Onix branded phone and FullHD Android Media box.

The Onix branded phone is their second handset to sell through Aldi, although their first Android phone. With the first being the basic feature phone that was sold when Aldi first launched ‘Aldi Mobile’ in March last year. 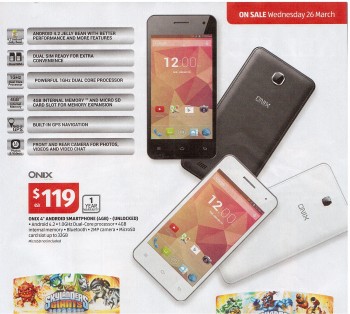 The phone is nothing particularly memorable, and is very much aimed at the entry level smartphone market. While it is Dual-SIM compatible the rest of the specs leave a lot to be desired :

The only bonus is that the phone appears to come in a choice of Black or White. There’s a 1 Year Warranty on the phone but no mention of the usual 60 Day satisfaction guarantee which usually accompanies Aldi phones. At $119 it’s a pretty decent cheapish option for someone looking at a very entry level smartphone.

Next up is something a little more interesting, the Bauhn FullHD Android Media Box. The Media Box supports FullHD 1080P video out and contains both wired and wireless network connections for media streaming from a DLNA server or web surfing. The Media Box also comes with Google Play so you can install a host of video streaming Apps such as , TenPlay or iview.

Full Specs for the Bauhn FullHD Android Media Player(AMC-014) are available on Bauhn’s website but include :

The box does come with a remote and supports microSD Cards up to 32GB to play videos back from, or you can use a USB drive in one of the two USB ports. With Android 4.0 Ice Cream Sandwich on-board it’s not going to be the best experience but it’s not Gingerbread so that’s something. The Bauhn FullHD Android Media Box comes with a 1 year warranty as well as a 60 day satisfaction return warranty.

Both of these Android devices go on-sale in Aldi stores on Wednesday the 26th of March. Head over to Aldi webpage to check out your local stores opening times.

tell the service center of this phone onix in chandigarh (india)

were do you get a phone cover for a onix 4in

If you didn’t buy from Aldi, a cover for this phone, back when Aldi sold the phone, then you won’t be able to find a third party cover for it anywhere.

Aldi source no-name, el-cheapo, less than popular, devices for branding with any one of their brand names, Onix; Medion; Bauhn; Tempo; etc.

I bought one of these recently for $70. The charger fits my Samsung GT55511T [I think that is the model, I do not have a microscope]. I put up with the Onix for about four days but my old phone is far superior. I just have to work out whether to take it back for a refund, or keep the charger and trash the phone. Main problem is the battery only last about 8 hours. Would not recommend it to my enemies – I do not hate anyone that much. If I can get a charger cheaper, the phone will… Read more »

Camera seems ok, BUT, no flash?

I picked up one of these from my nearest Aldi – not too bad. Works better with a mouse and keyboard though at this stage.

Gotta be close to the cheapest media player out there. If it actually works, despite it’s inelegance, I think it could be useful to someone that only want to spend $70.

Ergh.
Aldi, source from someone who is not supplying the absolute bottom of the barrel.

OMG it’s an Aldi Galaxy S2 or should we call it an ALDI iPhone 3G.

Quick somebody call the patent lawyers, that’s a rounded rectangle!