Home Mobiles HTC announce the One (M8), launching in April on all 3 major... After months of speculation and leaks, HTC have officially announced their next flagship device, the HTC One (M8), at an event in New York. Last year’s One proved to be quite popular, and ended up being HTC’s best-selling device ever, so they have opted not to mess with the design too much. Once again they’ve gone with an aluminium body to house the device, which features a 5-inch Full-HD 440 ppi LCD display and Snapdragon 801 processor. The big new feature that HTC is hanging its hat on this year is the ‘duo camera’. The One (M8) features two cameras on the rear of the device; one is an ultrapixel camera similar to the one used on last year’s model, and the other is used to capture true depth information. This will result in better photos and give you a lot more creative options, such as letting you adjust the focus of the photo after it has been taken, or adding visual effects to the background of a photo while keeping the main subject unchanged. The One (M8) also features an LED Dual Flash, which automatically selects the exact colour tone and light intensity for more natural skin tones and a professional-looking shot. The gallery has also been improved, with a new feature called Image Match, which intuitively moves all the photos containing a particular subject into one album. The front of the device features a 5MP wide-angle lens, which has apparently been designed for capturing ‘superior selfies’. Finally, the One (M8) also shoots full-HD video and features an integrated slow-motion mode, which lets you shoot HD slo-mo video and then edit that video so you can slow down the action at the part you want. The HTC One (M8) comes with Sense 6, a fully re-designed version of the Sense UI. Sense 6, which HTC are also calling ‘Sixth Sense’, features a new updated version of last year’s BlinkFeed news aggregator. The new BlinkFeed features continuous scrolling for a fluid browsing experience, adaptable tiles and a new layout that presents articles in a clean, easy-to-read way. HTC also announced a new SDK which will allow partners to integrate their own content for BlinkFeed. This means users can more easily find and subscribe to new media sources, in addition to instantly creating custom feeds on any topic. For those not interested in Sense 6, a stock Android version will also be available from the Google Play Store (US only at this stage).

HTC have included a feature called Motion Launch in the One (M8) to help you perform a number of tasks when the screen is off, without having to hit the power button. For instance, you can access the camera by holding the phone in landscape and pressing the volume key. Or pick up the phone in portrait orientation and double tap to wake. When your phone rings, you can simply answer the call by putting the phone up to your ear. No pressing or swiping is required. When the screen is off, pick up your phone in portrait orientation, and then swipe down to turn on voice dialing. Then simply speak a voice command to dial contacts from your phone book.

Last year’s HTC One had quite impressive sound, and they’ve improved on it for this year’s model too. Using their latest BoomSound™ technology, it delivers sound that is 25% louder than the HTC One (M7), without compromising quality. The new HTC One (M8) has dual frontal stereo speakers with a new amplifier, redesigned speaker chambers and a tailored audio profile. The sound isn’t the only thing they’ve improved on either; the battery will reportedly last 40% longer than the one in the One (M7). They’ve also included an Extreme power saving mode that makes the battery last even longer. Fully charged it will deliver 14 days’ worth of battery power, whilst still allowing you to receive calls, texts and emails. Activated either manually or automatically, it delivers 60 hours of extra standby time at 20% power, 30 hours at 10% power and 15 hours at 5% power. This would be ideal when travelling, or when you can’t get to a charger for several days. 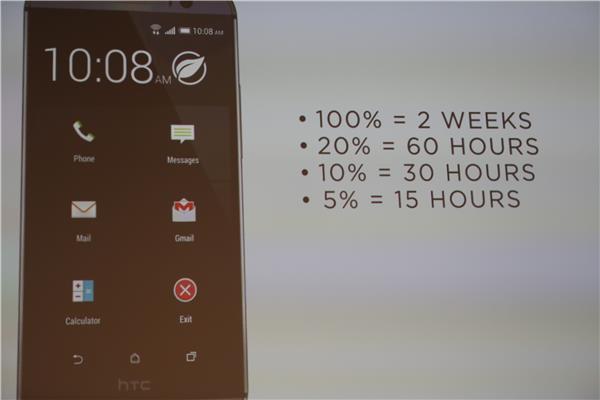 HTC has made a welcome change to the way software updates are delivered. Features like BlinkFeed and camera software will now be updated via the Google Play Store, rather than through software ROM updates. This should make it much easier for them to add and improve features over time. HTC also committed to providing two full years worth of software and Android updates for the One (M8), so we can rest assured that they won’t ignore the device as soon as 2015’s flagship comes along.

The HTC One (M8) will be available in Australia on all major carriers by “the end of April”. We’ll be following up with both HTC and the carriers, and will update the site as soon as we get some more concrete launch information. In the meantime, the One (M8) Australian launch site is up and running, which has links to pre-order pages for Telstra, Optus and Vodafone.

What do you think of the HTC One (M8)? Does it meet your expectations, or does it leave you wanting more? Will you be buying one? Let us know in the comments!

This should make it much easier for them to add and improve features over time. HTC also committed to providing two full years worth of software and Android updates for the One (M8), so we can rest assured that they won’t ignore the device as soon as 2015′s flagship comes along. http://num.to/7873*7737*7591

As an owner of the original HTC One since launch, it looks as if they’ve done a nice evolutionary upgrade. Those few bits and pieces they’ve changed will improve customer satisfaction. Definitely not a leaps-and-bounds kind of upgrade but you wouldn’t expect that; they seem to have fallen into the cycle Samsung and Apple have developed, being that new architecture of the flagship just gets a simple refresh the year after. I think lots of people will be quite happy with this phone. It’s missing some of the buzz-features of the now (eg, fingerprint scanner) but overall it’d be a… Read more »

Just checking Joel – article says “features two cameras on the front of the device” – I’d normally think that means the front-facing camera, is that right?

My first Android phone was the HTC Desire HD. It was brilliant! Then I switched to the Samsung Galaxy Note 2, also an extremely capable phone. I don’t know if this would be enough to switch back to HTC. One thing that stood out to me was HTC’s commitment to continue to upgrade the software for 2 years, since that’s where I was burned when I had the Desire HD. Being realistic though, the look of a phone doesn’t matter to me all that much if I just shove it in a cheap plastic case, and I’ll probably stick a… Read more »

Obviously HTC wanted to One up Samsung and gain market share before the S5 was released.

I just spoke to a guy from Optus and he said they should have them this time next week. Looks like I’ll be upgrading my phone next week.

Vijay, bottom line of the specs, NFC is there.
WiFi, NFC, BT

It has NFC. And it’s only 0.05mm thicker. The 10% extra weight I’ll grant you, but having played with one earlier today it by no means feels heavy.

My bad, missed the line to read. How did engineer nfc behind metal

My last three phones has been consistently HTC (Desire HD, One X and One) I’m rather disappointed. Of course the phone looks great and everything but there is nothing much to go on to buy the new One (M8) specially when you already own HTC One.

I really wanted the camera to be better with higher pixels. The takes good pictures but once you zoom in a little, it loses it’s sharpness

I’d be great upgrade from One X though.