HTC has only just launched their flagship for 2014 – the All New HTC One (M8) but already thoughts are turning to other phones along the lines of the original HTC One which saw a Mini and Max version released throughout 2013, and it seems a Swedish telco has outed the existence of the mini at least on a list of phones compatible with HD Voice.

The original One, One Mini and One Max are listed as well, just to allay any fears of confusion : 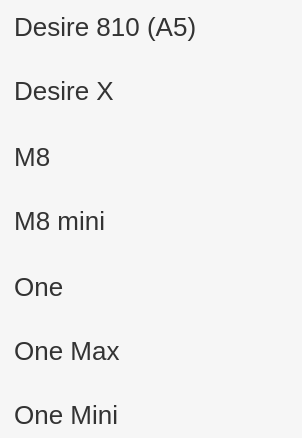 According to Droid-Life, the specs are expected to be along the lines of a traditional ‘mini’ phone – i.e a lot lower spec than the original – rather than a ‘Compact’ version as Sony released, with HTC reportedly including a 4.5″ display with 720P resolution and powered by a 1.4GHz Snapdragon processor with 1GB of RAM and 16GB on-board storage.

The One Mini will forgo the ‘UltraPixel’ camera and the new Duo Camera from the new One (M8) including a 13MP Rear camera but will retain the 5MP Front-facing camera.

The phone will run Sense 6 atop Android 4.4.2 at launch and will include the on-screen buttons.

It sounds rather low end but there must be a market for it, time will tell if the One Mini (M8) will be called – The All New HTC One Mini (M8)…but we hope not.

How does the One Mini (M8) sound to you?

Midrange specs is why I didn’t buy the original One mini, and these specs have turned me off again.
Add Snapdragon 800 and 2GB ram and they’d have a winner.
Sony Z1 compact here I come