The PR battle between HTC and Samsung has begun anew, with the launch of the Galaxy S5 and HTC One M8 launching in the coming weeks.

If you want to buy a product built out of cheap plastic, there’s a solution for you. But we’re going after a different customer, someone who wants the best.

It’s an easy slight to make against any of Samsung’s Galaxy S flagships – pundits and commentators have been saying much the same thing for a few years now. Rumours that Samsung would ditch the plastic construction for an all-metal design in 2014 don’t seem to have panned-out.

If HTC was cautious about the reception for the One’s all-metal design in 2013, it’s taken the favourable reactions to it (and to its followup) and gone all-out for it in 2014. Comparing HTC’s priorities to Samsung’s, Mackenzie said:

We’re a company that invests in our customers and delivers a beautifully designed product that you can feel proud of, Samsung is a company that’s focused on investing in advertising.

While Mackenzie is perhaps making a valid point, it’s worth remembering that Samsung’s also delivering a large number of phones to a large number of satisfied customers. To an extent, this kind of trash-talking is a bit uncalled-for.

It’s not the first time HTC’s taken the fight to Samsung. Many of us remember the tweet HTC made during the Galaxy S4 launch event: 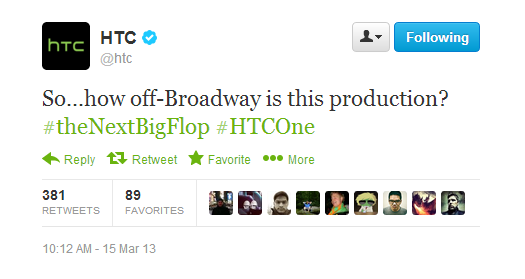 For its part, Samsung seems unperturbed by the comments. 2013 saw Samsung dominate HTC (and pretty much everyone else) in advertising spend, and with the Taiwanese company’s very public financial problems of the last couple of years it seems unlikely that they’ll be able to match the Korean giant.

As far as advertising spend and marketing plans go, HTC Australia’s Ben Hodgson flat out told journalists at the One M8 launch event that they didn’t see going toe-to-toe with Samsung as a productive option. It’s hard to fault that logic, but it is important to market your flagship product. HTC famously (or infamously) brought in Robert Downey Jr for an expensive marketing campaign last year, but we’re yet to hear from him this year.

We’ll see what HTC has up its sleeve in the next few months, but hopefully it’ll be more show and less talk.

What do you think of the “cheap piece of plastic” comment – does it have any foundation, or is it a case of sour grapes? Tell us in the comments!

poor HTC….i pity them as they cannot control their envy over samsung ;p

I really think this type of marketing is childish and disrespectful from HTC. They did the same last year and so did Nokia. Coming from big companies to publicly bash other brands shows how unprofessional and desperate HTC and Nokia is in marketing there phones. So to end this HTC and Nokia sell your phone and market your phones on there design software and hardware, not with cheap jabs at your rivals.

Scratch testing the HTC one 2013 did not go well.

We have dummy models that we check this sort of thing with. Within 10 mins of having the phone in a pocket with keys it was scratched (I know people try to avoid this but some days u just cant.)

After a short time in a hand bag. In the very small phone section . again a lot of scratches..

I love the design but I always put a case on my phone anyway..

Ironically, despite claiming that Samsung cares more about advertising than product, HTC is actually copying Samsung’s marketing strategy by trashing it — Samsung does the same thing to Apple.

I Would go the Samsung over the HTC for 2 Reasons.
Removable Battery – Easy to Repair, Samsung wins on both occasions.
If HTC had a removable battery, I would consider it as an option for my next Purchase.

I’ve always found plastic to be a better material for phones than aluminium. Better reception, lighter, more durable and less prone to scratches. I’ll never forget, some years ago now, owning an HTC Legend and managing to badly scratch the chassis within the first few days of owning it. I’ve got a work colleague that has done exactly the same thing with her 2013 HTC One. And then of course we’ve seen what happens with glass (iPhone, Nexus 4). I really do believe that plastic is a great material for phones. However, HTC’s comments on Samsung’s advertising carry a lot… Read more »

Yeah look, their displays, processors and cameras are always very competitive. The option of expandable storage and a removable battery are plus points as well. If they just scaled back their software and cleaned up its aesthetics they really would have a killer package right out of the box.

All the major device manufacturers are equally as guilty of the same thing in regards to their mangling and burrying Android underneath their ‘skins’.
Samsung and HTC are still the equal worst offenders on this score.
Sony has scaled back their junk, somewhat.
LG and Huawei are both trying to achieve the same level of damage that the front running pair have managed to execute.
After being bought out by Google, Moto heavily cleaned out the junk, but since Moto are now owned by Lenovo, who knows if the junk free will hold.

Samsung and HTC are not equal offenders. No way. Sense is much cleaner, faster and more intuitive than Touchwiz.

While plastic is cheap…I bet it still comes better off from a drop…there are advantages amd disadvantages to both. Atleast this time htc have gone with ext sd support. But to bash the competition does seem a bit sour grapes. Most every flagship is a decent smartphone…except for blackberry…though that may be because I’ve never used one, then again I’ve never used a WP either but I can see some appeal. If I hadnt purchased a Notr 3 recently I would have considered the HTC one more than I did last year because there really is appeal in a premium… Read more »

Plastic will always be objectively better.