Google are the kings of April Fools Day, they often deliver a multitude of pranks starting in our time-zone and continuing on into their own. As there’s usually a few, we’ll be adding them into this article as we find them – and encourage you to update the comments with any good ones you find (with screenshots) so we can add them as well.

First Up: Google Maps now lets you find and catch wild Pokémon.
Google has kicked off April Fools day in Japan, with Pokemon – Gotta catch ’em all!! The feature is live now in Google Maps on Android, hit the search bar and you’ll be given the option to ‘Press Start’. Once you do you’ll be taken to a location – I was transported to Sydney – where a lab is positioned as your starting point to start exploring and catching all 150 Pokemon.

There’s 150 to collect and clicking each Pokemon in your Pokedex will bring up a full bio of each Pokemon. There’s a video accompanying this which shows off the AR aspect of a possible ‘Real Life’ Pokemon game…this isn’t such a bad idea after all!

Next, we have “Shelfies” or as Google call them Shareable Selfies.

Login to your GMail on the web this morning and you’ll see this new ‘feature’ that Google is rolling out to allow you to create and share selfie themes, the description says it best :

Selfie custom themes are incredibly popular in Gmail and they just got better. With Shelfies (Shareable Selfies) you can set your own photo as a Gmail custom theme and share it with your friends so they can enjoy looking at you as much as you do.

That’s all we’ve found so far, but we expect more, including one from GMail Australia. We’ll update as the day progresses, shout out as you find more in the comments.

Translate to Emoji
Thanks to Deej for the headsup (and Adrian for following up with a screenshot). We have a new one. Google has added ‘Translate to Emoji’ to Chrome and Chrome Beta for Android. It’s not actually working, but if you select it from the drop-down menu the usual Google Translate spinner ‘Translating to Emoji’ comes up, ‘ Seems like some terrible internet connectivity here meant this failed, but thanks to wjbeckett in the comments we got confirmation that this actually works.

There’s now a video for this :

This one is Google related but not quite ‘Google’, it’s from Tony Fadell (founder of Nest Labs which was recently acquired by Google) and Sir Richard Branson. It’s basically announcing that Nest and Virgin Airlines have teamed up to supply Nest Thermostats for each set on all planes in the Virgin Airlines fleet – an intriguing idea if you’ve ever flown internationally and had to share a climate with someone addicted to Air Conditioning.

Google Japan are apparently taking a second bite of the April Fools Day cherry, by introducing ‘The Magic Hand’. It proposes a mechanical input from a controllable finger which can then touch your screen for you.

The proposal includes a variety of different hand designs that will allow greater function or just be able to change with your mood. Check out the entry video:

Next, it looks like Google is adding AdSense to their list of April Fools day pranks, listing the moons of planets in our Solar System in AdSense : Thanks to Florian Popovici from PocketDroid for that one.

Hoff Photo Bombs!
Google has introduced another one, this time from the Google+ Photos team who have introduced Auto Awesome Photobombs, starting with your favorite celebrity: David Hasselhoff. Today we’re announcing Auto Awesome Photobombs. What’s more fun than Benedict Cumberbatch photobombing U2 at The Oscars? Or Michelle Obama at The White House? A good photobomb can turn an ordinary photo into something special and put a smile on your face. Now with Auto Awesome, celebrities can make a spontaneous appearance in your pictures!

The Google+ team also encourages you to tag The Hoff in any posts you make as well. From the initial post, it seems that David Hasselhoff has been keyed up on this one, with Google specifically tagging him and he did actually comment on the Google+ Post.

Ok, so overnight there was some more April Fools pranks as the time zone moved into Google’s home market. 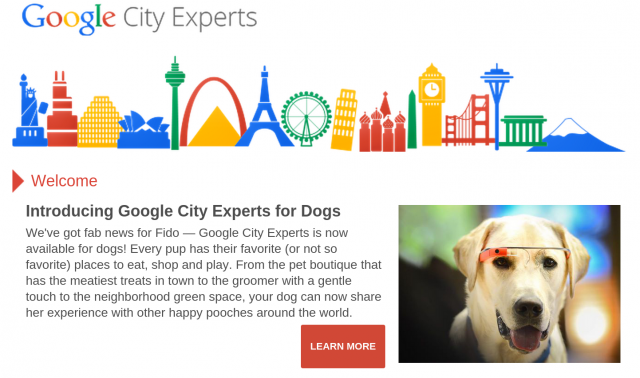 Of course dogs will have their preferred dog parks, dog friendly cafes etc….actually this isn’t a terrible idea. Of course clicking the ‘Learn More’ button takes you to the Google Search result for April Fools Day.

How about a Google Fiber April Fools Day prank? Well, they decided to go for Coffee to the Home :

It’s a pretty good video too :

Next up, how about a Cat Keyboard? Well, Francois Beaufort, well known Chrome Advocate announced a Cat Keyboard Chrome Extension. The Chrome Extension description on the Chrome Webstore is pretty good, they even went to the effort of making an actual bug in the Chrome bug tracker. :

On the Chrome OS team, we take pride in creating an operating system for everyone. Based on a long-standing feature request (crbug.com/135117), we’ve designed a cat-friendly on-screen keyboard, based on extensive Animal-Computer Interaction (ACI) research.

You or your cat can install the kitty keyboard and try these features:
– Four pawing modalities using your trackpad or touchscreen
– Mouse mode
– Cat translation technology (beta)

But this is just the beginning: input research is underway for other pet users, including dogs, fish, hamsters, and dinosaurs.

Check out the video which shows the keyboard in action, it’s literally Chromebook Everyone :

Google Play Developers haven’t been left out of April Fools Day – how about Google Play Signature Edition Apps? The idea is that instead of the cold, impersonal data transfer with an actual unboxing experience. It lets developers deliver a USB drive and ship the app on a USB drive to the customer.

How about Auto-Awesome Résumés?
Google is bringing the idea of Auto-Awesome from their photos to your résumé. You can move your CV into a folder in Drive and Auto-Awesome it, if you have skiing as an interest, you’ll get snow falling. It sounds kinda Awesome :

Actually kind of cool, they say they’ll auto match it to the Google Jobs on offer. Now, that would be cool, although I suspect I wouldn’t qualify for much at Google.

Chromecast: A New Era of Squirrel Entertainment
Seriously, read the description and then watch the video. I offer no further comment except get this product to Australia Google!!

With Chromecast, a new era of squirrel entertainment is upon us. No longer will squirrels be restricted to watching human music and videos on TV.

Google does a Doge April Fools Day prank, adding a Job listing for a Software Dogengineer. Such responsibilities :

Much lols, the full listing : Still with the Dog (although not Doge) theme, Google Business has introduced Google Apps for Dogs :

Who says the underdog can’t be employee of the month? See how Google Apps for Business Dogs helps pups everywhere be more productive at the office. To learn about how humans use Google products for work, go to google.com/work

Seems everyone missed this one:

Is that a dual screen Nexus 5 in the pokemon video?

Emoji translate works for me!
Just had to retry the translate and was okay

Chrome for Android is offering “Translate to Emoji” as an option.

Not seeing this – Screenshot?