Home Mobiles Apps, Games & Google Services How an Australian company is helping promote Google Play in the US...

Sydney based company Tapit — which just so happens to be one of the market leaders in the Near Field Communications (NFC) marketing world — have just announced their newest campaign working with Google in the US. The campaign will use NFC used in conjunction with traditional advertising to promote Google Play Movies in cities across the US.

This isn’t Tapit’s first work with Google, having partnered with Google Australia last year to create an NFC-enabled marketing campaign to promote Google Music on a select number of buses in Sydney, as well as on trains in Melbourne & Brisbane. That Australian Google Music campaign was successful, with Tapit and Google being nominated in the Best Marketing Campaign category in the 2014 Global Contactless Awards, with the winners to be announced on the 29th of April this year.

Their current campaign is similar in format to the Google Play Music campaign, with NFC enabled promotional posters being used to encourage people to learn more about Google’s online media distribution options available in Google Play. The promotional posters have been distributed in 2,500 outdoor locations across New York, San Francisco, Chicago & Los Angeles. Here’s one such poster: The posters are a much larger in both size and scale than their previous campaign. The posters still contain an embedded NFC tag, which when tapped direct people to a specific mobile site to learn more about Google Play Movies, however in a few days they will be offering a free voucher to be redeemed in the Google Play Store as well.

From the locations shown, the posters are being distributed in sites controlled by advertising companies VanWagner, as well as Spanish based advertising company CEMUSA. CEMUSA was purchased in March this year by JCDecaux, a French advertising company, who have worked successfully with Tapit on promotional campaigns in Sydney over the past few years. The NFC platform which Tapit provides allows for large amount of metrics and data to be collated, and we all know that Google loves data. Each NFC tag embedded in the posters can be tracked and data from each ‘tap’ is collected and collated. Information from the very basics such as the time that each poster is tapped, through to how many times each tag is tapped will be collected and analysed by both Tapit and Google.

As you can see, this will quickly give them an impression of which posters are performing well and getting ‘tap throughs’, and which aren’t, allowing Google to rapidly target the posters to areas where there’s likely to be a higher uptake. A simple metric, but very powerful. 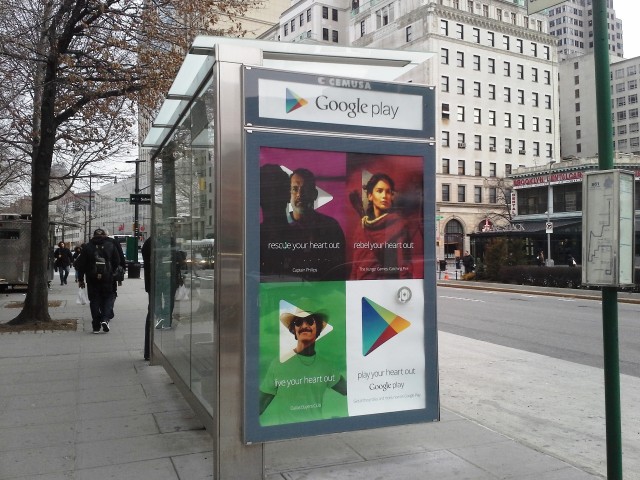 This is a great example of NSW technology being exported across the world. Tapit has continued to work closely with the NSW Government, for instance to successfully implement NFC technologies at The Rocks, the world’s first heritage precinct to offer visitors interactive tours using their mobile phones.

Andrew Davis, COO and Co-Founder of Tapit sees the Google deal as a significant milestone for the company

This deal reinforces our vision of taking Tapit to a global audience and partnering with the biggest companies on the planet. Like we have said from the beginning, “we’re changing the world one tap at a time”.

We approached Google for comment on both the Google Music campaign as well as this new advertising push focused on Google Play Movies and they declined to comment.

With a successful campaign with Google Australia under their belts, and a larger more prominent campaign underway with Google US, the sky is literally the limit for Tapit.

Tapit sounds like a very interesting company to work for. I wonder if they are ever going to launch a campaign in Perth?