Home News and Editorial Rumour: Telstra getting ready to launch the Sony Xperia Z2 on $70... It looks like Telstra could be about to launch the long-awaited Sony Xperia Z2. The national carrier has apparently accidentally let the cat out of the bag by releasing two online ads naming the handset on their $70 per month Accelerate plans.

The two ads showed up on News.com.au, with one a banner ad at the top of the page:

While the other showed up further down the page in the side-bar : Both ads directed to the Telstra website, but to a non-working page, which brings up an error saying ‘Oops. We can’t connect you with that page’, indicating that the page has not yet gone live as yet.

The plan on offer – the $70 per month Accelerate plan, with an added $6 per month handset payment on a 24 month contract, for a total minimum cost of $1,824 over 24 months. The $70 Accelerate plan offers .Thanks to SammyK: $700 worth of talk and MMS, as well as unlimited Text messages and 1.5GB of Data. The phone would also qualify for the additional ‘New Phone Feeling’ option, but we’ve seen nothing to suggest that option is a great idea financially.

This latest flagship release compares quite favourably against the big guns, with the Galaxy S5 available on the same plan at $101 per month, while the HTC One (M8) is available on the $70 Mobile Accelerate Plan with a $12 per month handset repayment.

Overseas and through Mobicity, there is a bonus pack that is being included with the phone, which contains an accessory pack worth $250 that includes a Sony RS-BTM8 Portable Bluetooth Wireless Speaker as well as a pair of MDR-NC31EM Noise Canceling Headphones. 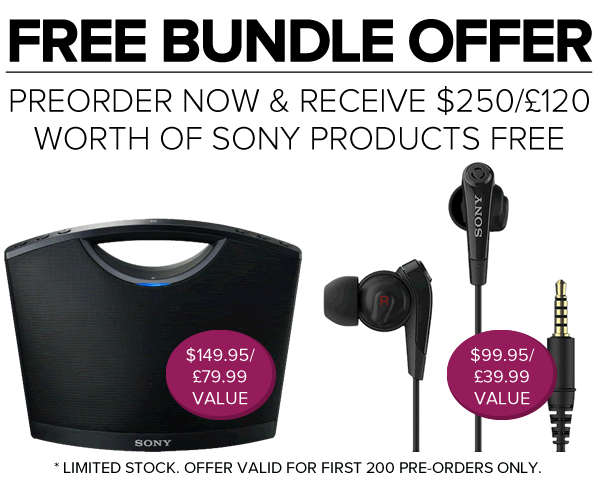 We’ll have to wait and see if Australian carriers intend to launch this bonus pack, or have something else up their sleeves for the launch of the Z2.

We look forward to an official announcement from not only Telstra, but Vodafone and Optus who have also advised they will be carrying the Xperia Z2 on their networks. Telstra is currently taking expressions of interest on their website, as is Vodafone.

Does anyone know when this might get released as I’m no suddenly in the market for a phone (My 11 month old M7 coudn’t be repaired after 3 attemps so I got a full refund from Telstra) and after using my wifes Z1 I’m certainly looking forward to the Z2 as I buy one.

still waiting to see if the Z2 can actually produce great photos, despite all the tech specs of the sensor it didn’t perform well in its previous incarnations (Z1 and Z1 Compact) as the noise was too high and the sharpening algorithm pretty awful as well as having lens soft spots. reviews have mostly had issues with the cameras and I use flickr searches by camera type to see output and for the most part even the Nexus 5 consistently outdoes the Z series output

Before I get commented, I understand that Mobicity has been opening preorder. However, I am referring the telcos as the service providers.

Thanks God. Finally things to start getting clearer. Australia Telco/Carriers have been nearly “Silent” for some time. Optus has only say ‘coming soon’. Vodafone has been totally silent, not even mention anything about the Z2.

It has been available in Singapore. In Australia?? not even a preorder is available.

Do they affraid that Sony Z2 will kill the sales of Galaxy S5 if they announce sony Z2 preorder too close to the time of Galaxy S5 release as the Z2 has better specs and looks?

They’d never dare do something like selling a phone, say, the HTC One M8 while the Galaxy S5 is waiting in the wings. It would just spoil their phone-selling-hating business model!

After all, unless the carrier sells a Samsung it’s not really a sale. They may as well be paid by customers with monopoly money. Totally worthless!

Wrong Telstra plan you’ve listed, it’ll be the M plan. You’ve described the L plan which is $95 with a phone, $70 without.

Actually no. That’s the plan it’s supposed to be.

Actually sammyk300 is right, because this comes with a phone it’ll be the M plan.

Don’t mean to be rude but you’ll need to research how the Telstra plans work, I’m very sure I’m right