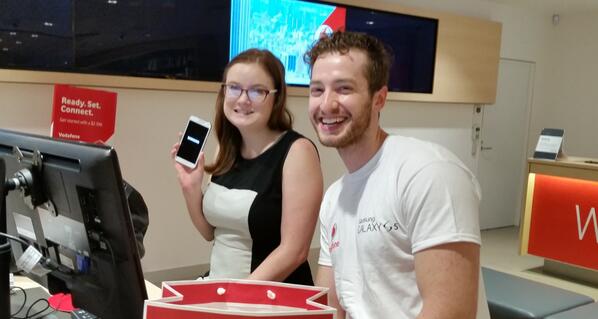 The Samsung Galaxy S5 launched worldwide today, and due to the timezones, Australia was the first country to kick off sales. Vodafone were aiming for the early adopter crowd and opened selected stores from 6am, a ploy that seems to have worked, with Vodafone Australia managing to sell the what they are claiming is the worlds first Samsung Galaxy S5 [Ed. we don’t count South Korean embargo breakers ;)].

With such a popular phone, Brittany said she was aware that the stock would sell out fast and knowing that the Vodafone stores were opening early for it, she decided to head in early. It was a decision that paid off, because according to Vodafone, Brittany is officially the first customer in the world to purchase the Galaxy S5. We did ask Samsung’s PR to confirm this but they weren’t able to tell us much by the time we went to press.

Brittany found it quite funny to be crowned with such an ‘honour’ and was certainly not expecting it. Of course, being first means that she has been in possession of a very nice new toy to play with today and probably won’t be able to do much work. Brittany said she did happen to go past the Vodafone store later and described it as a ‘madhouse’, so it was definitely a great idea to head in early.

The Galaxy S5 is an upgrade from her trusty Virgin Mobile Galaxy S3 and when planning to upgrade, Brittany did her homework. She opted for the $60 Vodafone Plan, which includes double data giving her 3GB of data to use. After grabbing her Shimmering White Galaxy S5, Brittany picked up a flip cover for her new phone from the Samsung Experience store just down the road.

While she didn’t grab a Gear 2 or Gear Fit to go along with her new phone, she is looking forward to trying out the S-Health applications when she gets some time to get acquainted with this new feature. Also, the cost of a Gear 2/Gear Fit on top of a new phone is a big ask … perhaps Samsung or Vodafone could come to the party for their first Galaxy S5 customer?

We asked Brittany for her initial impressions of the Galaxy S5, and here’s what she thought, in her own words.

In regards to design, it’s quite sleek and light. I was a bit disappointed that they didn’t go with brushed metal, but I chose the ‘Shimmering White’ option and I don’t even really notice the plastic!

It’s also very fast, and the OS is really nice. I really like the new buttons in settings (or I will once I figure out where everything is!)

Camera quality is quite sharp, but I haven’t really had a chance to test it out yet. Will definitely get on that this weekend.

The fingerprint scanner surprisingly works pretty well. I’ve upgraded from the S3, and the face recognition feature was a gimmick I grew tired of pretty quickly. It will be interesting to see whether I switch back to the tried and true pattern password. The only issue I have with the fingerprint scanner is that my hand is small, and I need two hands to get it to work right. When I scan my fingerprint on an angle, it doesn’t register properly.

I’ve picked up a flip case with a window from the Samsung store on George St, Sydney. If you turn the screen on with the case closed, the S5 recognises this and switches to a smaller screen. It has all the important information there, with an option to use the camera without unlocking. That was a big setback with the S3, took a few minutes to get the camera up and running! If you are listening to music, it displays the album cover, and options to pause, skip and go back. Super easy to use.

If you want to keep an eye on Brittany’s experiences with the new phone over the weekend, which she’s promised to put out on her Twitter feed, you can follow her at @BrittyAlyce.

Did you buy a Galaxy S5 today like Brittany? Tell us about your experience in the comments!

Some Samsung stores sold the S5 at 12am GMT+8 in Malaysia, so not world’s, maybe Australia’s first on release day ahaha

Too bad she is ugly