LG are set to join the party of flagship releases in 2014. So far we have seen the HTC One M8, the Samsung Galaxy S5 and the Sony Xperia Z2. The LG 2014 sequel to their 2013 G2, is rumoured to be announced on May 17 and while we have seen a few rumours regarding its specs the details are few and far between, with the main one being that it totes a QHD display of 2560×1440 resolution. In the past few days we have seen some more details surface.

MyLGPhones have unearthed a User Agent Profile of a Sprint Version of the LG G3. The important specs leaked within the UA Profile are:

One of the main criticisms LG have copped in the past has been its UI or skin that it uses on top of the standard Android interface. In last year’s review of the LG G2 it was the main negative of the device. It will be interesting to see if LG have been listening to any of the criticism heaped upon them by users of this interface. A screenshot of the home-screen of the LG G3 has leaked showing a flatter interface. This is much more mature than that of previous years. We can only hope that LG follow this UI change throughout the entire Android interface. 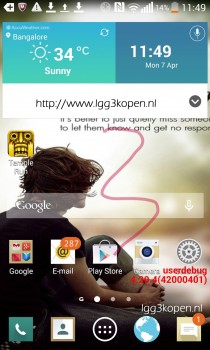 Not much about this device seems to make it stand out from its competitors and I suspect the lower specced CPU may struggle a bit with a QHD screen resolution. With many of the other flagships out and available now LG had better get their act into gear and get this out there if they expect to make any impact at all in the high end smartphone market of 2014.

Will you be getting this phone? Would you prefer an LG over the Samsung or HTC flagships?

Huh? There’s no way that’s the SoC being used. It’s a year old.

Agreed, it’s not going to happen when every other flagship is using the newer 801 chip. In fact a gold version has been sighted (a finish which may appeal to lovers of bling) and it contains the superior yet to be released 805 chipset. Read another review about the released Oppo Find 7a selling for $499 which incidentally runs the 801, has super fast charging, is 4k video capable, supports SD cards up to 128GB, is a 5.5″ display at only 1080p but blows every camera out of the water with its 50mp images (check out Youtube reviews). LG needs… Read more »

Phil, thanks for that. I hadn’t been following the info on Theme Park since returning my L7 II to Optus shortly before the translate patch was done.

I think people have missed the point you can theme LG’s UI which got rid of my major annoyances, ie cartoony boring icons and style, now if only the KitKat update would hurry up so i can replace that hideous shade of neon blue in the notification bar with a more subtle white

The problem with that, Geoffrey, is that the ‘theming’ software is Windows only and is Korean only. No translations.

I beg to disagree considering I’ve been running a KitKat themed LG G2 bought locally and in English for two months now, you just need to do a bit of searching for a theme that suits you there’s plenty out there

Check out this dev if you haven’t already, he has some nice themes in my opinion.

I’ve had an update of my LG G2 recently. Maybe your’s is waiting for the carrier.

Nexus 6 is what I’m waiting to see, however I really like the Sony Z2 and LG G2/3 over Samsung and this years HTC M8. Haven’t used the UI’s in any major way though but what I’ve seen the G3 is my likely second but after the Nexus 6.

After the G3 is released, the LG G2 should drop in price. I’ll be keeping an eye on the G2 and the previous flagship phones from the other manufacturers instead.

If LG don’t screw up the UI by trying to bury Android under their damage to it, as they did to their 2013 released devices, this could be a VERY nice device.

It’s the one big stopper. Their phone hardware has been very nice the past couple of years.
Just stop trying to be a bad copy of Samsung. Leave the useless novelties alone. Play it straight.

LG’s launcher heavily influenced by TouchWiz is the one reason I’m not a great big fan of what they do. Clearly they can make kickass hardware.. just look at the Nexus 5. Just needs the quality software that distinguishes it from the other muck in the market to really stand out.

could agree more Jeni and toast. The hardware is top end but they seem to have not learnt a single thing from their adventures with the Nexus’. I have an optimus G and the software on that was woeful! Stuck an AOSP rom on it- so much better.

The UI is very functional and blazing fast, they’re not trying to bury Android like Samsung. The only negative thing is the looks not functionality, my G2 is fantastic and if I wanted stock I’d go and get a Nexus.

You may be right. It may be as simple as nicer icons.
I was playing with a Flex in Harvey Norman, thinking that I loved it physically, but ergh, the bad cartooniness on the screen was completely off-putting.

Yes I agree with you, that’s why I install themes to get rid of the cartoony icons (themes for the lg launcher)

The LG Launcher has themes? Or do you put a full skin on it?

I have a G2, the UI does look like TouchWiz but it is much faster and almost lag free.

I openly admit that I have perhaps unfair prejudices. Happy to be corrected.

The LG UI is just blazing fast, I understand if people think it looks like Touchwiz but when it comes to performance they’re not even in the same ballpark.

Check out this dev, he’s been adding new themes for the past week. Once you install it just go to home setting>themes then choose the downloaded one. Some guys over at XDA have themes like this with the stock Kitkat icons etc.

I hope you’re joking. The LG UI is honestly 10x worse then any Samsung skinned phone. Incredibly bloated, super cartoonish, and that notification centre is an absolute eyesore.

To each their own I suppose, I’m more than happy with my G2.

I won’t deny that it’s smoother. You got that right.

Phil I had the misfortune, last year, to encounter the LG UI. I bought an Optus prepaid LG L7 II ( P713go ).

LG’s damage to stock android frustrated me a lot.
Facilities diked out, pure AOSP Android buried under LG’s performance wasting skin, ‘themes’ which are NOT customizable outside of Korea (the LG ‘theme’ creation and customization program for windows is hardcoded with Korean characters only no translation), the notification centre, non-standard lockscreen widgets in 4.1.2 (Yes LG DID manage that, but have refused to share the secret of how.).

The themes are customisable outside of Korea. As for performance wasting, that is most likely due to the weak processor that inside the L7 II, my old L9 was snappy and the G2 is just as smooth as any other phone.