One of the best things about modern phones in my opinion is the wireless charging via the Qi standard. The ability to easily just place a phone onto a pad and have it charge and then be able to pick it up quickly without being constrained by an attached USB cable or having to disconnect this cable before using the phone is an amazing convenience. Slowly there have been more and more Chinese suppliers coming out with Qi chargers suitable for charging our devices.

Way back at the beginning of December last year I reviewed a Car Dock Qi charger.  Ever since then I have used it extensively and have loved just about every minute of it. When I was contacted by a different company to test out their version of the Car Dock Qi Charger I jumped at the opportunity. The version I received from ChoeTech is available only at Amazon and unfortunately they do not ship to Australia at the moment but if you search around sites like eBay you can find products very similar. From Amazon this will cost you around the $50US mark but they will not ship to Australia. A similar product off eBay will set you back about $40AUD. 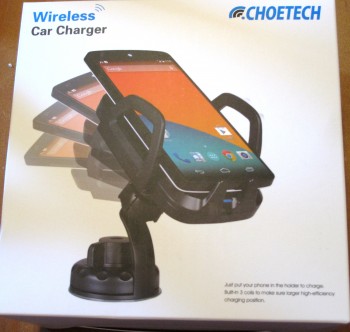 Before receiving the device I was sceptical to whether it was actually real but it arrived in good time from the distributor in Asia. From the box all the way through the packaging I was impressed with the quality of the presentation of the accessory. Inside the box ChoeTech provide: The previous car dock Qi charger I have reviewed had 2 main issues- it was slippery and wasn’t very stable. Every single vibration in the car caused massive vibration of the charger/phone. It also seemed to be very sensitive in positioning to achieve charging. This is possibly because of small charging coils within the charger meaning the position has little leeway when positioning for charging. The charger from ChoeTech seems to have addressed these issues well.

The charger has a charging light at the bottom to signify when charging is taking place. I tested it on both a Nexus 4 and a Nexus 5 and it worked flawlessly. ChoeTech say the charging area is larger than normal and allows for the phone to be placed on the charger at any height and charging will occur. I certainly noticed this. Without having a moveable part on the bottom of the charger it was a lot sturdier than the previous charger reviewed. The microUSB connection is at the bottom of the base plate, a much more sensible position than for my previous review. It is easy to see, easy to connect and does not result in a USB cable snaking all over the dash on its way to the charging socket.

The back of the charger where the phone is in contact with it is covered in a soft rubbery material that allows the phone to grip onto the charger well and combined with the side clamps holds the phone still. This is a nice addition to the one I reviewed last year. The opening of the clamps is also a nice, easy to use button on the top of the back of the charger. I like this position as it easily allows you to remove the phone without fiddling to find the unlock button. Closing the clamps feels smooth and solid and easily hold the naked Nexus 4 and Nexus 5 safely. It also managed to hold my Nexus 5 with the thick Spigen Slim Armor Case although I did have to be careful to make sure it was fully closed as it was touch and go whether it was secure enough. It was once closed fully. It also charged the phone without issue with the case on.

Since I received the charger from ChoeTech they have upgraded the windshield mount to a much sturdier mount which can only improve an already great product.

Once again the charger got a bit hot while in the sun and mounted on the windshield on a 30 degree day but I suspect that is just the case of how the charging works combined with the heat radiating through the window. Once the charger was placed on the air vent holder instead there was not a single heat issue. The charger also charged the battery as fast as any other wireless charger I have tried.

In conclusion, the car dock wireless Qi charger from ChoeTech is a premium product, a definite improvement over the previous car dock Qi charger tested last last year. I can definitely recommend this product to anyone looking for a wireless charging solution for the car.

You should review the airdock ( http://www.theairdock.com/ ), aesthetically it looks alot better.

Montalbert_Scott I’ve got one of these on the way, which should prove extremely easy to mount and charge in the car…

I funded it way back, and I think they are due to post out this month, so should be a product available for purchase quite soon.

I really have to question the value of this review. A product not readily available but we may be able to source if we search on Ebay? Some disclosure might be in order here as well. Was the free product provided on the understanding that a review would be posted? Come on guys, you’re better than this. Poor judgement.

Except that is nothing like the unit reviewed. Try and find the one that was reviewed.

I also have the previous one, the only issue i have is that i couldn’t get the screen to stay on when charging wirelessly even with developer options etc. Eventually did some googling and created a tasker profile which leaves the screen on whilst in wireless charging mode. Otherwise no issues. This one looks good too.

Thats what i do. I use tasker.

I assume the dock can rotate to a horizontal position?

So you’ve reviewed a product that we can’t actually buy in AUS.

So then sent you a product to review that they don’t actually sell? Riiiiight.

This is a device that Gadgets 4 Geeks should be made aware of. Get them to deal with ChoeTech to become their AU distro mob.

Well, this sucks. This review basically made me want to buy this device straight away, as it seems to resolve a number of issues experienced with my current car QI charger. However, Amazon is telling me that they don’t ship to Australia. Or at least Western Sydney. Anyone else with this problem?

yeah- at this stage they don’t.

just spoke to them. they are in the process of finalising an Australian distributor. I’ll keep you posted when I find out.

Did anything come of this?

Not sure if this helps, but Gadgets 4 Geeks has similar ones here in stock in Aus: http://www.gadgets4geeks.com.au/products/qi-wireless-charging

one of them is the same one Scott reviewed here: http://ausdroid.net/2013/12/05/review-car-dock-qi-charger/

*Note; I work at G4G – but thought you may still be searching.