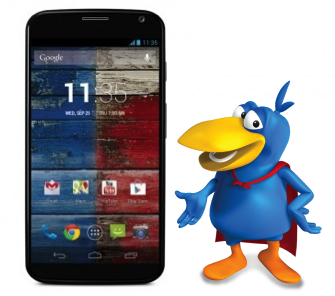 The Moto X has only arrived on Australian shores in the last couple of weeks, at launch it’s mainly been available for purchase outright with no carriers announcing plans for the phone. But Dodo Mobile are bucking the trend and offering the device on two of their Post Paid Plans.

Backed by the Optus 4G network Dodo is offering the Moto X on two of their top tier plans – the Mobile Smart Mega and Smart Plus plans :

Head over to the Dodo Website and select the Black or White Moto X from the selector tool to check out the call rates, inclusions and terms and conditions for the above plans.

Given the Moto X is now 8 months old and Motorola has already advised that they will be replacing the phone around August/September and rumours surrounding the Moto X+1 are strengthening, you may want to wait. But, it’s been heralded as a pretty awesome phone overseas and did get quite amazing reviews, these Dodo plans could help bring the Moto X to the Samsung-Apple dominated marketplace.

Do the Dodo plans tempt you to consider buying the Moto X through them directly? or have you brought the Moto X outright and if so, what are your favourite features of the device?

Seems like handset repayments are the new thing. Considering 2 years ago u could get the same plan and a flagship for free in a $60 plan…i felt i was already paying the handset. Looks like ill be buying my next handset because Im not paying 60 a month when i primarily use data and maybe 30 -60 mins of calls and THEN pay for the handset too…even a two year old ohone has a handset repayment when it never use to. Come on

Will Dutton
Reply to  NOZ

Yeah it’s pretty dumb when the sim only month to month plan with all the same features is $30 and if you go with an mvno it might be as little as $20. Their numbers don’t really add up do they

It may have been an awesome phone, but it’s not a $500-awesome phone with the current competition.

I didn’t even know Dodo had a mobile service. Wouldn’t ever trust them either.

I’m in the market for a new phone and it was down to the nexus 5 and the moto x so I went along to JB hifi and they didnt have a working display model of the moto x and they wouldnt open one up for me to try and that really was put the kibosh on it for me. I’m not spending $500 on a phone I can’t even see switched on, so I reckon I’ll be ordering a N5

JB Hi-Fi only have dummy models available sadly. Maybe try your local Telechoice store to see if they have any working available models for you to try out

Will Dutton
Reply to  Alex D

thanks thats a good tip I’ll try that

You can also try Dodo Connect stores if you’re in Melbourne.

Or if in Melbourne, maybe see Dodo Connect Stores to see if they have a working model available. The Dodo Connect stores can be seen here – http://www.dodoconnect.net/