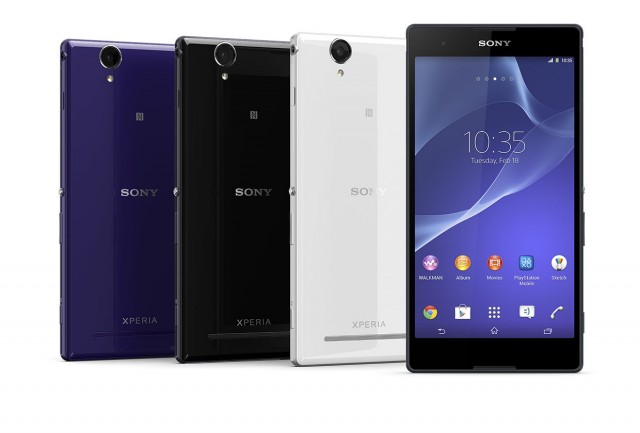 Sony yesterday announced that they will begin selling the Xperia T2 Ultra dual – the Dual-SIM version of the T2 Ultra – in Australia, with stock of the handset due to begin arriving in stores from the end of the week.

With a 6″ 720P HD display up front, the T2 Ultra is powered by a 1.4GHz Quad-Core Snapdragon processor with 1GB of RAM and has 8GB of storage coupled with a Micro SD slot expandable up to 32GB. Sony is a world leader in camera tech and has included a 13MP Exmor RS camera on the rear and a 1.1MP Exmor R front-facing ‘Selfie’ camera which includes ‘Portrait retouch’ Apps. Sony has positioned the T2 Ultra as a phone with an all day battery and with a 3,000 mAh battery onboard, they aren’t kidding around.

The phone is a decently specced mid-range device; the price however is slightly higher than your average Nexus phone. The price from retailers JB HiFi, All Phones and The Good Guys set at $549, which includes a BlueAnt Endure Bluetooth Headset, normally worth $79.00. If, however you’re not so keen on the Bluetooth headset you can grab it from Sony Centres, kiosks and Sony online for $499.

The T2 Ultra looks to be a decent phone, it’s got the familiar White, Black and Purple colour options, but as to which ones will show up in-store is not clear as it hasn’t made it to Sony’s website as yet.

Is the Sony Xperia T2 Ultra your next phone?

As soon as you called it a front facing “selfie” camera I stopped reading. Please never do that again.

Pretty sure that’s Sony’s naming of the camera, not ours.

This makes my heart sad.

3000mah in a phone this size is not necessarily good. The z1 has a 3000mah battery also and its battery life for on screen time really wasnt good compared to other flagship tests. 6 hours compared to comparable test 10 hours