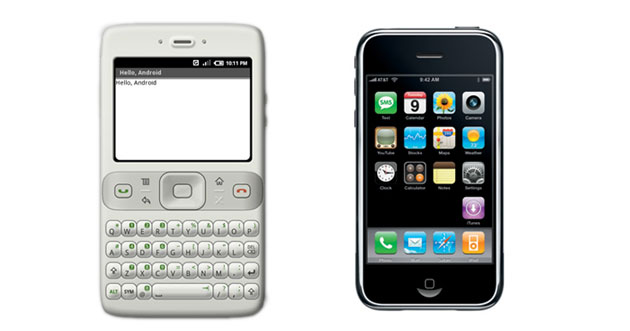 In the early days of Android, Google was only considering a traditional keyboard interface (like that shown above), and the advent of a touch-screen interface came much later with the release of the first iPhone.

As part of the continued hearing in the US Supreme Court between Apple and Samsung, Google’s Android engineering VP Hiroshi Lockheimer was placed on the stand and gave evidence about the early days of Android. He explained that as of 2006, the Android open platform only considered the use of a physical keyboard as part of the OS operation and hardware requirements.

Lockheimer’s documents were destined for potential hardware makers, to show them where Android was headed. Android, at the time based on Linux Kernel 2.6, didn’t actually have support for touchscreens.

In its 2006 specification for Android devices, Google stated:

Touchscreens will not be supported. […] The product was designed with the presence of discrete physical buttons as an assumption. However, there is nothing fundamental in the products architecture that prevents the support of touchscreens in the future.

Other interesting tidbits from the documents include the plans to use Microsoft’s FAT 32 file system. Fortunately that didn’t eventuate, as we know that Microsoft has since been asking device makers for licensing fees for using that technology.

Android still features some of the things developed in the very early days, including support for widgets, removable storage, third party applications, notifications and of course integration with Google services. It’s worth remember that at the time, Apple’s iPhone supported precisely none of these features — it’s only with more recent updates that some of these features are now supported. Removable storage and widgets are still absent, and probably will stay that way.

You can read the full original Android Project Software Functional Requirements below:

What do you think about Android being originally based on a physical keyboard device compared to an all touchscreen device? Is Android better based on a touchscreen or would you like to see such a device? We would like to here your thoughts below.

Not sure why Google has been so anti non capacitive buttons then. personally I find Samsung’s implementation just as usable as Googles. I’ve owned a SGS2, Nexus 7 (2013) and a Z1 Compact and the onscreen buttons on the Z1 compact really eat into the 4.3″ screen. The usable area on my old SGS2 (same size screen) seems much larger.

If anyone at all out there has that phone above – the HTC Sooner….aka HTC EXCA 300 CALL ME, TWEET ME etc – I WANT IT.

I doubt anyone will, search eBay, you might strike lucky.

I have a persistent eBay search for it. Thanks though.

Have you ever seen one on the internet? Or in the wild?

On the internet, yes, there’s quite a few, but not for sale. In the wild, not so much.

Not at all unsurprising to learn that Android wasn’t, originally, a touch screen oriented OS. Back at that point in time, stylus based, resistive screen, single point touch, technology was the norm for touch screens.

Candybar with keyboard below screen might be good, if the screenres was high enough.
I don’t, however, know of any such devices with a screenres above QVGA, which even back in Froyo/GB days, apps would choke on, due to the too low sreenres.

What I would like to see make a comeback is the trackball.

I miss the trackball from my Nexus One to this very day.

Copy and improve, such has been the way of human history right back to the trees