With the Amazing Spider-Man 2 hitting cinemas in Australia yesterday, the movie tie-in game from Gameloft has also made an appearance. Swinging into Google Play at $5.49, Gameloft has also included a few In-App Purchases as well – Spidey needs new outfits.

When not fighting henchmen or major villains such as Venom, the Green Goblin, Electro, and more in the game, you’ll be swinging through a digitally rendered New York City, interacting with other Marvel characters like Black Cat and Screwball. While not all the villains and characters listed make an appearance in the movie, Gameloft are quick to point out that the game is based on an original story which expands on the film.

At 1.2GB it’s a large game, so make sure you’re connected to WiFi and have enough space for it. You’ll also need Android 4.0 and above to install it, but that’s now 80% of the Android user base so the majority should be covered. Check it out in Google Play, and if you haven’t get along to a cinema and check out the movie. 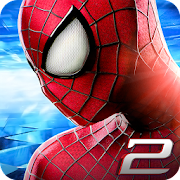