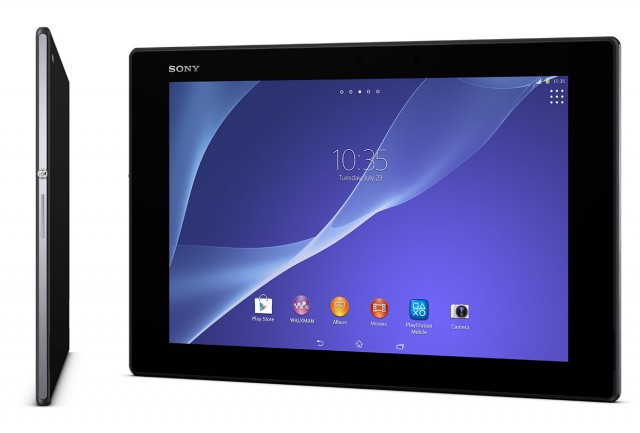 Here’s some news to excite people that are looking for a high-end 10″ tablet: Sony‘s Xperia Z2 Tablet is now available for pre-order in Australia and set to be released on April 29.

We’ve known the specs of Sony’s new tablet for a while, and the manuals leaked online in late March, but it’s taken until today’s press release to get pricing and availability. With the Z2 Tablet hitting our shelves now, hopefully Sony’s Z2 phone won’t be far behind.

The Z2 Tablet will be available in 3 SKUs – Sony’s standard 16/32GB Wi-fi models, but if you want 4G connectivity you’re stuck with 16GB storage:

The 4G version of the tablet will also be available from Telstra on April 29 for an outright cost of $720 (a little below Sony’s RRP), or on plans starting at $55/month (personal) or $60/month (business) with 4GB of data for 2-year contracts.

Having been lucky enough to check out the original Sony Xperia Tablet Z, I’m keen to see how Sony have improved on what was already an outstanding piece of hardware with a great user experience.

You can preorder the tablet from Sony now, but if you’re after the 4G model you might do well to save yourself $30 and buy it from Telstra.

Are you interested in the Xperia Z2 Tablet? Will you buy it outright or on a plan? Tell us in the comments!

I’ve heard there are issues with the screen in terms of registing touch and swipes. It’s been reported on a few sites. I bought the Galaxy Tab Pro but the weight and the fixed buttons are annoying me so thinking of getting this provided the touch issue is just a software issue that can be corrected with an update.

I’m genuinely excited by this, I have a Galaxy Note as my every day tablet and an Asus Transformer Prime as my bedside “entertainment” (read networked XBMC) tablet, but I wish I could justify the cost of this for the rare times I want a portable 10″.

I have the Tablet Z, and apart from the front facing speakers and noise cancelation, I can’t see a good enough reason to upgrade.

So excited. Can’t wait. I’m still unsure which SKU to get though. The telstra plans dont sound so bad considering that you only pay $20 a month for the device ($480 over 24mths) and you get 4GB of data? Right?

$20 a month is just the repayment for the tablet, although, you are paying $480 for a 4G version.

The smallest plan is $55 a month total, for 4GB of Data and the 4G Version