Being a writer for Ausdroid has it’s perks, reviewing devices that you wouldn’t necessarily otherwise buy or have access to is one of them. The Asus Transformer Pad TF701 arived in my life for about 2 days now and generally speaking I’m fairly impressed, cosmetically it’s quite pleasing and has a very slick, “cool” look to it but it’s not without its faults and foibles.

Getting the bad and the ugly out of the way first; one of my biggest aggravations with any Android device is the gall of a manufacturer to have the belief that their device is worthy of a proprietary charger. Guess what the TF701 has? You got it, a proprietary charger so your chargers you’ve got around the house or at your work place are useless on this little gem and as yet I’ve not found a source to purchase another; no doubt at an inflated cost over a generic MicroUSB Cable. It’s not only this but there’s no way to charge the tablet as a stand alone device, you must have the tablet in the dock and use the proprietary charger to charge the tablet.

The other issue I have with the package is the keyboard, don’t get me wrong it works quite well as a keyboard but the overall feel is very plasticy and (sorry Asus) it feels cheap. They keys themselves have a really clean feel to them, almost Mac-like touch but the dock itself tends to skid around on a table if you’re typing, has a very hollow sound to it as you type and the hinge is too loose which causes the screen to bounce back and forth slightly when you’re typing and if you happen to use the touch screen while in the dock you’re probably going to need to readjust the screen to a comfortable reading angle. 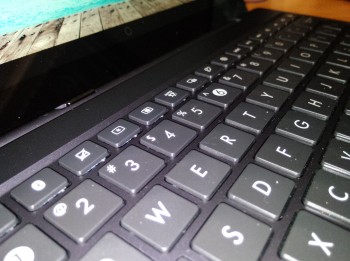 The Screen
The screen is a really pleasing experience, the IPS panel running at a whopping 2560 x 1600 (WQXGA) resolution with an 10 point multi-touch response it’s clear to see (see what I did there?) that Asus hold a lot of pride in the visual presentation of their device. The colour reproduction on the screen is excellent with the only fault I’ve seen so far is the whites have a very slight greyish/yellow wash through them but in complete fairness to Asus, the only reason I noticed this is that I had the Transformer Pad on my desk next to an embarrassingly expensive gaming monitor.

Cameras
The cameras are nothing to write home about and frankly, nothing to be relied upon for capturing anything than a few happy snap moments if your phone isn’t close to hand. The front facing camera is a pretty stock standard 1.2MP camera clearly intended for Hangouts and Skype video calls and nothing more. The rear facing is a functional but not quite respectable 5MP that (provided you’re not in low light conditions) will do a reasonable job at capturing some reasonable pictures.

Performance and Software
It’s really nice to see device like this coming out with the most recent version of software, but unfortunately it hasn’t! It’s running Jellybean 4.2.2 which is fine from a functionality perspective but; perhaps its just me, to pay upwards of $580 from some of the online discount dealers and not get the latest version of Android or at least a promise of it coming soon is unacceptable.

The sound that you get out of the device either as a stand alone device or via headphones is very good, quality of speakers in the tablet is great when compared to other similar devices and handles music quite well too with the obvious exception of bass.

Putting aside the initial gripes about the device, particularly as a stand alone tablet device I’m pretty impressed so far. The touch response is outstanding and the screen clarity puts this in the top 5 tablets I’ve ever used alongside the Galaxy Note 10.1 (2014), The Xperia Tablet Z, Nexus 10 and the king of the 10″ tablet; the iPad so it’s in very good company. The main question I need to answer for myself and hopefully for the Ausdroid readers is; Are the issues I’ve noticed in the first 2 days with the Asus Transformer Pad TF701 Deal breakers?

Does the look of the Transformer Pad TF701 catch your eye?

There’s a reason this device has taken so long to turn up in Australia. It has been plagued by build quality issues since it was launched last year. Check the growing thread on xda “TF701 Build Quality Issues”. I purchased on one in November and have barely used it. Since then it has been back to ASUS twice and today it sits in its box totally bricked and useless. On the surface this device looks great. I still have an original Transformer but since then the quality of these has rapidly declined. Don’t bother with it. ASUS suck at customer… Read more »

Nexus 10 in your top 5 tablets? surely we couldnt of used the same device

The more I use microUSB the more I dislike it. Always vibrating out during car trips, easily damaged by going in the wrong way. I have many devices at home and now actively avoid microUSB. Thank goodness most of my microUSB devices take QI charging. As for my Asus and Galaxy Tab, I way prefer the proprietary charging.
I suppose it’s a case of different strokes Jeni

I don’t disagree that Qi charging is the more intelligent way to go. On something like this Transformer, it should have been fitted.

Why do you prefer proprietary only charging for your Asus and Galaxy Tab?

I don’t disagree with how easy it is, with use, for a microUSB to become loose simply from daily use.

The proprietary connections don’t damage, slip out, easier to connect quickly. I’ve had two devices damaged by their cheap microUSB fittings and in the car my phone and connector rattle apart getting me to destination with a non-charged device.
I just don’t see microUSB as the way forward and a better standard needs to be found. Until a better standard is found I prefer well built proprietary connections over microUSB. Even Apples Lightning connector is leaps ahead.

Actually Phil, I’d prefer 4.2.2 over 4.3 or KitKat, to maintain access to USB MSC mode and proper access to microSD. The charger setup is the dealbreaker for me. On my Aldi Bauhn 10.1in tablet, I’ve had the plugpack charger fail, and the USB to barrel connector cable fail, thankfully the tablet also charges via microUSB or I’d be fragged. After what happened with my Aldi tablet, as far as I am concerned, if the Android device doesn’t charge via microUSB, then it’s no sale. Poor quality rear camera is another turnoff. How poorly does it compare to the rear… Read more »