Home Mobiles LG G3 caught on camera from behind showing off re-designed volume and...

The LG G3 is coming, and if the frequency of leaks is anything to judge, it’s coming soon. Overnight GSMArena has shown off a picture of the rear of the LG G3, showing off the now familiar rear-mounted volume and power key setup but with a new design. 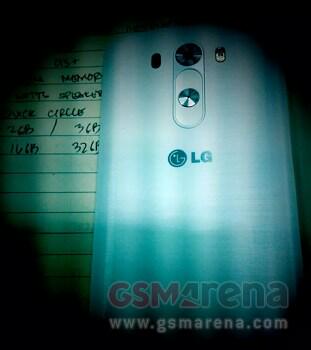 As you can see the phone is resting on a notepad full of what appears to be specs, leading to the conclusion that this could very well be an orchestrated leak. The specs mention 16GB/32GB options for storage and what appears to be 3GB of RAM, but the handwriting is a little messy. Also there appears to be a mention of OIS+, which is rumoured to be paired with an improved 16MP camera sensor.

The main feature is of course those rear mounted keys which have taken on a more rounded look than we saw originally on the LG G2 and again on the G Flex. What’s different is the addition of, what appears to be the IR sensor to the left of the camera lens. LG first placed the IR sensor on the rear of the phone on the LG G Flex, a move they claimed was purely for ergonomics, a claim backed up when you use it. It’s far easier to control the remote app in the phone with the rear of the phone pointed towards the TV.

We expect to see the LG G3 announced mid-year with from all reports a lovely 2560×1600 resolution 5.5″ screen and a refreshed UI. It’s shaping up to be a heck of a phone, it’s also highly likely that the G3 could be launched with the G Watch, so stay tuned.

The back sure looks busy