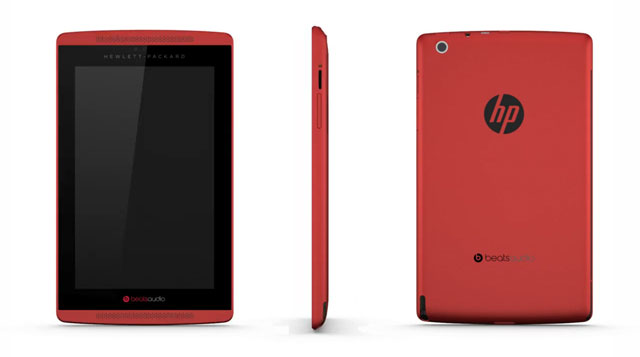 HP is continuing its line of Android products and Beats-branded products again at the same time, with a new Slate 7 Beats Special Edition tablet.

We heard a few rumblings of the new tablet earlier this month, but didn’t have anything official to go on until now. HP added a quick 360-degree “product rotation” video to their site over the weekend. You can see some screencaps from the video above. The new tablet looks to be a variant of its Slate 7 Extreme Edition tablet, trading in the silver accents for hot red and adding Beats branding to the tablet. Unfortunately, there’s not much more to go on.

If this is indeed a recolour of the Slate 7 Extreme Edition then we should look to that model for some possible specifications. It’s packing an Nvidia Tegra 4 with 1GB RAM, 16GB storage with a MicroSD slot and a 1280×800 7-inch IPS display – not unrealistic specs for a budget tablet.

You’ll recall that we weren’t really smitten with the company’s first Slate 7 effort in July last year, and that also featured Beats branding although the Extreme Edition version did not.

PocketDroid says the tablet is currently rumoured to come in between US $170-250 and will run KitKat at launch. The current Slate 7 Extreme Edition is priced locally at AUD $299.

We’re waiting to hear from HP’s Australian PR representatives about a local release of the tablet.

It’s expected that some combination of audio software/hardware in the tablet will be provided by Beats, and of course we’re still waiting for an Australian launch of the Beats Music service. Could the two be related?

HP might look to launch this Beats Special Edition tablet when Telstra launches Beats Music as a cross-brand promotion. We’ve heard that the service would launch within months in Australia and know that Telstra wants to do it before June 30 and replace its current MOG service.

Are you interested in HP’s Beats Special Edition of this tablet? What would sway you for/against it? Let us know in the comments!

i notice a stylus slot on the tablet 😮

Correct – the Extreme Edition also has such a stylus.