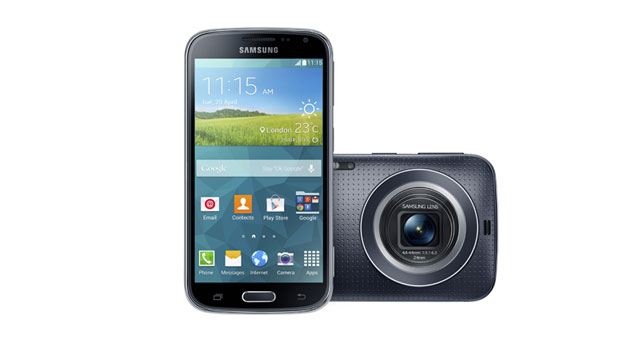 Samsung has just taken the wraps off the new Galaxy K Zoom camera-smartphone hybrid at its “Kapture the Moment” event in Singapore.

Like the Galaxy S4 Zoom before it, the new device features a 10x optical zoom lens on the front delivering visuals to a 20.7MP backside-illuminated CMOS sensor with Optical Image Stabilisation, surrounded by a stippled/perforated case that echoes the Galaxy S5 rear. There’s also a Xenon flash for proper flash photography. Flip it over, and you’ll find a decidedly more standard-looking Samsung phone face – a 4.8-inch 720p Super AMOLED display framed with Samsung’s usual speakers, home button and capacitive buttons.

The whole thing’s powered by a Samsung hexa-core Exynos chipset (although like the Galaxy S5, this might change in markets where Samsung uses Qualcomm chips for LTE connectivity), 2GB of RAM, 8GB storage (of course there’s a MicroSD slot), and Android KitKat.

No Samsung Android-powered camera/smartphone would be complete without a few camera enhancements, and Samsung’s highlighted a few of the Galaxy K Zoom’s headline features in its press release:

AF/AE Separation (Auto Focus/ Auto Exposure Separation) brings a more precise balance of light and clarity,
Pro Suggest mode offers up to 5 filter settings based on the current environment,
Selfie Alarm snaps three photos when it detects it’s pointed at your head, and
Object tracing allows the device to capture a clear, focused shot of a moving subject

Samsung’s history is a bit spotted when it comes to Android devices and photography. After launching the original Galaxy Camera, we saw the Galaxy S4 Zoom last year, which many assumed to be the “new” Galaxy Camera at the time. That device itself saw a rather late introduction to the local Australian market, and we’re actually yet to see the Galaxy NX “prosumer” camera here at all. There also seems to be a Galaxy NX Mini on its way, and the Galaxy Camera itself got a refresh earlier this year – it now has a form factor that seems closer to the Galaxy K Zoom.

The new Galaxy K moniker separates the phone and camera lines in the market. It appears Samsung may be trying to peg back some of the confusion it introduced last year when it attached its flagship Galaxy S4 name to the S4 Zoom. Hopefully we’ll see the product lines simplify into the K and NX lines… or perhaps even further.

Samsung Electronics Australia is excited to confirm that the Galaxy K zoom will be launched in Australia in the coming months.

Samsung continues to innovate to meet the wide variety of needs of today’s consumers. For many Australians, their smartphone is their primary camera. The Samsung Galaxy K zoom is our latest pioneering device, equipped with the features that a smartphone user needs to stay connected while also providing an outstanding camera.

Information regarding local pricing and retailer availability will be announced closer to the Australian on sale date for this product.

I don’t believe how this discussion has turned. I really don’t.

All I did was post was on what I saw as a repeated weakness in this latest model in the Galaxy Zoom line. Too low a screen resolution.

The Galaxy K Zoom can record video in full HD, but cannot play it back at full HD in native resolution, on the device itself, because the screen is only a 720p one.

Outside of the screen resolution issue, the Galaxy K Zoom looks to be a really great Android device.

Maybe you should have said like you did here, your points are very valid. Phrasing it as “the Galaxy K Zoom looks to be a really great Android device, I would love to see it with a full HD display” is a much better less negative comment. Just a thought.

This is pretty close to it. I reckon Samsung’s third attempt will be the “it” device for a real camera-phone flagship. That said, price is a very critical factor here – any more than a top end compact super zoom (~$400) and it risks being a dud. My gut’s telling me it will be $600++ RRP though. :/

Im sold, so long as the price is not Galaxy S/Iphone (it will be) 🙁

The real let down, with the new Galaxy K Zoom, is the low res screen.
It really should have had a full HD screen.

If it had a FHD you would’ve just listed something else as a “let down”.

Phil, if this Samsung camera had a full HD screen, then the only problem I’d have is deciding whether to get the camera, or the HP Slate 14.

Starting to think the real let down is your negativity all over Ausdroid.

If I say something about it I get shouted down. Jeni is an intelligent lady with great ideas and a lot to bring to a proper discussion unfortunately she always comes across as negative. In most cases if you don’t have anything good to say you shut up.

I don’t remember the last time I saw a positive comment from her on Ausdroid. Nothing is good enough.

I’ve only been frequenting this site since mid-2013 but I’m starting to doubt if she ever said anything positive at all lol.

No product will ever be perfect. Honestly. Every device I’ve ever had has had it’s short comings. But that’s absolutely fine. I’ll still buy it. She acts as if it’s unworthy of owning or not worth buying just because it’s missing that one small thing she wants.

Definitely, no such thing as a perfect device but most people are more than fine with a few compromises/shortcomings. There’s plenty of devices that I wouldn’t consider buying but I don’t see the point of commenting on every article announcing that its crap or that I won’t buy it.

Exactly. I like both the HTC One M8 and the Samsung Galaxy S5. But I have my reasons for not purchasing them. I am by no means going to hate on them though.

That means ignoring every Ausdroid article.

There’s no need to be like that mate. Give the lady a break.

Get over it. This is the internet. There are no morals here.

I’m not the one complaining about peoples posts…

Get over it. This is the internet.