The LG G3 ship is leaking, fast. With an expected May 27th launch coming up, both the specs and phone are appearing on the internet more and more. We saw a heavily filtered version of this photo only days ago, now we get a clear look at the phone and the spec list that was written beneath it. 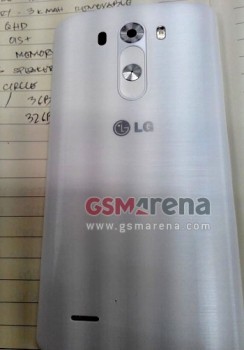 GSMArena have confirmed with a source within LG that the G3 will come with a 5.5″ QHD (2560×1440) display, giving the phone a pixel density of 534ppi. While the phone will of course be larger than it’s previous version, it will be slimmer, but still include a 3,000mAh battery.

Like the G2 before it, which was the first phone launched supporting 24 bit/192kHz audio, sound will be a key element in the G3, with the rear-mounted speaker said to support 1W output. The rear camera, which was rumoured to be 16MP, has been confirmed as being a 13MP sensor but will carry the new OIS+ image stabilization which launched on the LG G Pro 2.

All we can say is roll on the 27th of May. LG if you’re reading, we’re ready to fly to whichever of the six locations you’re launching the phone in to get a look at this wonderful new phone.

If LG cease their copycattng of Samsung and HTC on the G3, they will have a brilliant device.

Their last device was brilliant.