Google has today announced an update to their Google Maps app for Android (and iOS) which brings about a massive array of updates. This is a pretty massive update so what’s included?

Firstly, there will be Lane Guidance for navigation, but sadly this option is only available in the US, and parts of Canada and Japan. Lane Guidance will tell you – eventually – which lane to be in when you need to turn off during your journey.

Future planning is a big component of this Maps update. The ability to save maps to use offline is included, you can now save a map with a name and when you need it go to the search box in the app and scroll to see all your saved maps. You can also save destinations by hitting the ‘Star’ button on the card which shows the place you want. You can also explore places with Street View by hitting the place card.

For those who use Uber, you’ll be able to see Uber listed in amongst your walking, transit and driving directions, with the ability to jump straight into the App if you have it installed. 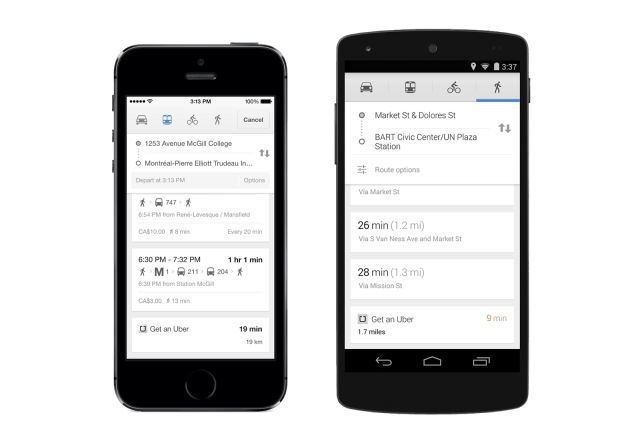 If you’re looking for information on bars, hotels and more, there’s new information about places included, but like all Google updates, they’re careful to state ‘Where Available’ so it’s probably not going to be in Australia.

Lastly, it appears that Transit information has been improved. The app will be rolling out now, but as usual it will probably be staggered, keep an eye out for your Google Play update notification.

A private ride sharing service, in competition to the monopoly of the Taxi Industry.

Here in Australia, the Taxi Industry has already successfully conned all state governments into actively making it almost impossible for Uber to legally get started.

The feature set is fine, but the real problem for me when using Maps is the low frame rate when scrolling, regardless of how powerful the phone is, even on my HTC One M8.

great to see they are finally re-introducing offline maps. Hope the new version will be as useful as the old version.