They’ve had a couple of really good devices in the recent past that have seen mediocre sales which shows that Asus are (outside the Nexus product line) yet to find a strong footprint in the Android world with their own branding. Clearly, given Google chose them over other manufacturers they got something right, very right, but did they get the Transformer Pad TF701 right?

This means if you want one at work, at home and one in your bag you need to purchase two more on top of the outlay cost of the device which you’ve just shelled out hundreds of dollars for. I noted that the charger could nearly fit in the port the wrong way around, which is a potential for danger in my book. Either make it so that the charger can go in either way (like the lightning connector that Apple now use) or so different it clearly won’t fit/work if you try to shove it in the wrong way.

I’ll publicly make a retraction of a comment made in my first impressions post here. Having only spent a relatively short amount of time with the device when I posted that article, I hadn’t realised that the dock connector to the tablet was in fact the same connector as the charger and which allows charging of the tablet while docked. 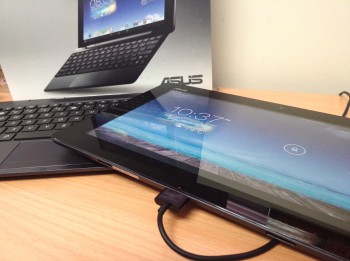 The other issue was the keyboard dock. Sure it’s light-weight but it just feels a bit cheap. It works great as a keyboard but it’s a bit too “tappy”, feels very plasticy and the feet aren’t particularly grippy so I found myself chasing the device around my desk a bit when I was using it as a replacement for my laptop (with varying degrees of success).

Anyway, let’s get into the review.

I had a TF301 which had to be returned 3 times under warranty. That was bad enough. What finally turned me off was that you can only unlock the boot loader with the Asus tool which simply didn’t work for many many people including me. So there’s no way of installing custom ROMs and almost impossible to sort out with Asus support.

So is it called the TF701T of the TF710T? Because I’ve seen people use both model numbers and it’s confusing.

after the debacle with TF700, I would be very wary of the any Asus tablet considering the problems they had with the tablet before TF700 still appeared on the TF700. SMH