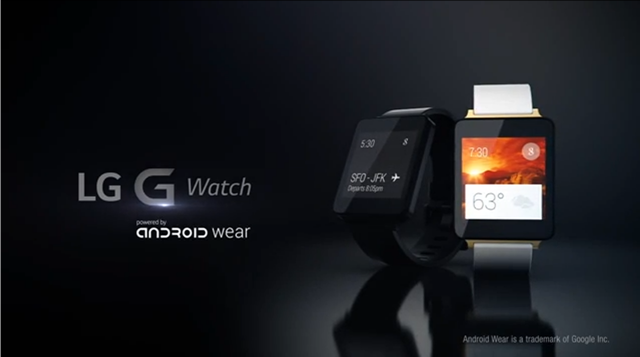 The LG G Watch is the second Android Wear product on the horizon, which is due to launch in the coming months. LG has been slowly releasing more and more details on the watch since it was announced, with details getting clearer each time.

Today, they have released a promo video for the watch which shows a wireframe heavy look at the watch, which talks up the design, featuring the sleekness and highliting the metal body which they claim gives it a ‘timeless look’. Features such as the waterproof nature of the watch is mentioned and we’re reminded that the watch is Android based.

Check out the video and see what you think:

I hope they are ready to significantly underprice whatever Motorola ends up charging for theirs – it’s significantly less sexy and more boxy. Personally I wouldn’t even look at such with out a price south of $199.

And is that a rear set of charging pins, not Qi? If so that’s a very dumb move – not only more complex, but also liable to get corroded to hell by acids in the skin, etc.

I’m still thinking that the Moto 360 is still a better looking watch but LG has made a good pitch there.

As far as product teaser videos go, this one by LG rocks.

But I’ll wait to see how it actually looks when worn, before deciding on getting one.

A neat teaser for their Android smartwatch.
I loved the BGM, wonder if it’s available to get as an MP3 for use as a ringtone?

Downloaded the video as MP4 and transcoded that to WAV.
Installed as ringtone on my LG Optimus One.
🙂

Well done LG. You gave the proper respect to the maker of the software in this clip. Take a leaf Samsung

Well I’m relieved that it’s “Ready… with a single charge”
I’m sick of all my electronic devices that I need to charge two or three times before I can use them.