The announcement of three new LG tablets on Monday caught many off guard and the initial announcement was fairly light on hardware details for any of the tablets in the new G Pad lineup. But it appears that the 7″ G Pad has dropped past AnTuTu benchmarks to check out how it fares against the competition, and in the process revealing what’s under the hood. 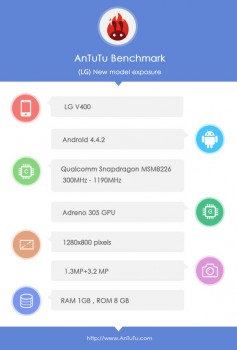 As you can see, the G Pad 7 will come with – obviously – a 7″ 1280×800 resolution display. Under the hood, the tablet will run a 1.2GHz Quad-Core Snapdragon 400 processor with 1GB of RAM. Storage wise, the tablet that presented to AnTuTu had 8GB on-board. There will be a 3.2MP Rear camera and a 1.3MP front-facing camera to make all those hangouts or skype calls.

Software wise, there will be Android 4.4, with LG’s software enhancements, which their press release promised would include a newly revamped QPair app and KnockCode security lock.

Price wise, there’s nothing to say still, but given the specs, LG would do well to aim at the $200 or just above mark to compete well with other tablets in the 7″ category. LG promised there would be further details on the tablets in the coming weeks, so stay tuned, and stay tuned to AnTuTu just in case the 8″ or 10.1″ G Pads show up.

Wouldn’t even buy this for $200Au personally. Hope the 8 and 10 inch models have better specs, especially screen res.