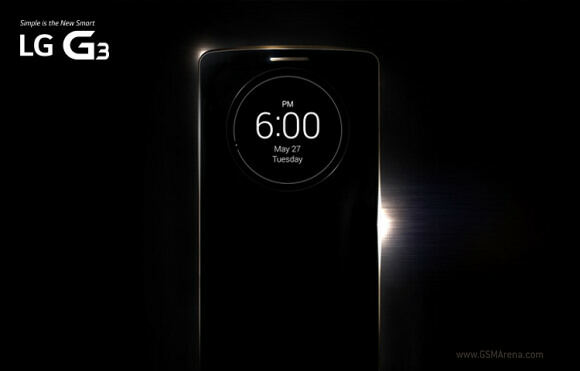 The countdown is on and this time the leaks are coming from inside LG, or at least from a meeting where LG was showing off promotional material, presumably to prepare partners for the launch of the G3. The model shown off is the Korean variant – LG-F400S/K/L – which will most likely differ slightly from the LG-D850/851/855 models we’ve seen for international markets.

The slides show a mix of specs and marketing material showing the features, a list of specs was shown off, which shows the phone will include a 5.5″ Quad HD IPS display which another slide further on confirms has a non-pentile matrix, instead the screen will use an sRGB 100% arrangement with a 538PPI pixel density. The phone will not be short of power, with a Snapdragon 801 processor and 3GB LPDDR3 RAM powering it. There will be 32GB on-board storage but there was no mention of microSD card expansion anywhere in the slides, but this was for the Korean model so perhaps the international models will be different.

The phone will come with a 13MP rear camera and 2.1MP front-facing camera, there’s also what appears to be a slide which shows off a comparison of two pictures – perhaps related to those laser guided photo rumours we heard about. There’s also a slide showing off a pinch gesture which uses the whole hand to take a photo in ‘selfie’ mode.

Connectivity wise the slides mention LTE and LTE-A for radios as well as USB 2.0, BT4.0(BLE) and NFC. There’s no mention of Wifi but you should expect the full gamut – 802.11 b/g/n/ac – and GPS with A-GPS/GLONASS is probably a definite as well.

Finally, the phone will be launching with Android 4.4, a must in this day and age of flagship phones. This Android 4.4 will definitely have the LG Skin we’ve seen in previous leaks, although it’s looking pretty promising in terms of functionality and looks.

Our Korean is a little rusty, so feel free to chime in, in the comments if you notice something in the slides we’ve missed, but this is a pretty good look at what to expect early next Wednesday morning.