Looks like those lucky enough to get their pre-orders in for Chromecast, when Dick Smith accidentally leaked the news that they would launch this week, are now receiving shipping confirmations for their orders. 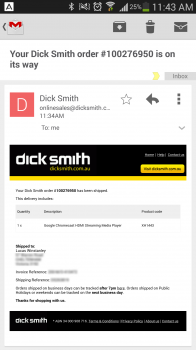 It looks like it’s game-on for Chromecast if their May 28th leak was correct. We have seen both JB Hifi and Dick Smith stores confirming to customers they have stock, we just need to see where else will be selling them, and which content partners Google have gotten on-board for the Australian launch.

Update, 2pm – it gets better. Lucas’ receipt even has ‘UNDER EMBARGO DO NOT SELL’ listed on it: 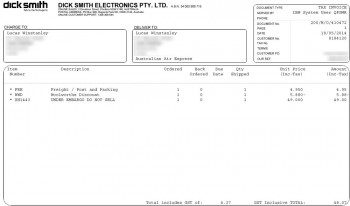 JB Hi-Fi at Chadstone setting up a new table near TV section! Wonder what that could be for! 😉

I doubt there’ll be any changes in the Australian version, particularly away from Google’s DNS.

I got mine on eBay months ago (got two actually cause they’re great!) and it works fine here in Aus; I don’t know if that helps.

No issue there, if the cast can’t connect to the Google dns it uses the dhcp one. Simply add some redirects in and you are ok. Search getflix chrome cast to get info.

Pretty sure the European ones DNS got patched, i recall a number of comments from users after an update of their US netflix access being cut.