The MeMO Pad 8 is an interesting device, at least to me it is, because I’ve never used an 8 inch tablet before. I wonder if it will be too big to hold in one hand. I wonder if the material that it’s made of will be grippy and soft to the touch. I wonder if the performance will be good, like my Nexus 7: Will it be that quick at browsing and jumping in and out of apps? And what will the display be like? It will be bigger, but, will it be sharp, and will text be easy to read, enjoyable even? And will it have nice, bright colours?

I’m keen to see what the interface will be like: Will it have a skin that’s all cluttered or will it be pretty close to a Nexus experience where everything is straightforward and easy for me to use! I wonder if there’ll be any unique but useful features. And will it have a recent version of Android? It’s gotta be at least Jelly Bean. Surely? Can it get me through a good days worth of use? You know, can I get at least 5 or 6 hours of ‘screen on’ time over the course of a long day? Anyway, these will be the things that are important to me I guess, and they’re probably important to most folks looking for an 8 inch tablet too.” – Those were my thoughts prior to receiving it. Having now used it for a couple of weeks, I can tell you how it did.

Asus have done a good job with the design by make the tablet easy to hold with nicely rounded corners that don’t dig into your hands. Being glossy it can get a little slippery or clammy when in use for extended periods of time. At this point in design it seems there’s no better trade off if white is the desired colour. Without the glossy finish a white gadget will pick up too much colour from things it comes into contact with. Construction is good with minimal flex and no creaking. It feels like a tablet that will provide good durability over it’s lifetime.
Along the top edge is a charging and data port, a headphone port and a microphone. On the front above the display is a selfie pic or video chat camera that sits alone without any sensors alongside it. Below the display is an unobtrusive ASUS logo. Thankfully the control buttons are on screen. There’s a microSD card slot along the left hand side toward the top and on the other side at about the same height is the power button. On the back at the top is a rear facing camera and toward the bottom is the loudspeaker. The bottom edge is completely untouched.

The display uses an IPS panel that has good colour rendition and plenty of brightness for it’s intended indoor use – it’s a WiFi only model. In direct sunlight reflections can be a problem because of the gap between the display and the glass above it. This won’t be problem for general indoor use though. With 189 pixels per inch HD video looks good and games come across quite well too.

Text is more affected by the lack of density. The difference between a 2013 Asus Nexus 7 and this 2013 Asus MeMO Pad 8 is easy to see when reading small words in a book or on a website. In general though, you’re presented with a colourful display that will satisfy most people’s tastes. The display nerds amongst us are probably looking at different tablets already. Viewing from sharp angles is acceptable for the most part so long as you’re not getting reflections on the glass from an external light source.

While using a “Quad Core” processor sounds impressive there are differences between them. Unfortunately this an older Rockchip SoC that doesn’t have the oomph of the newer Qualcomm SoCs that we see in market at the moment. General browsing or social apps, checking email, playing video and games that don’t use the very latest tech are all things you can do with this tablet. If you expect to switch effortlessly between those activities you’re in for a surprise though.

With only 1GB of memory you’ll run into delays soon enough and no effort to claw back resources will change that – I tried. The tablet performs fairly admirably considering the lack of power on tap. We’ll see why when we look at the software further down the page. The GPU component of the SoC is a Mali 400 which I suspect is a quad core part as the graphics performance in gmes and HD video is quite good despite the CPU component being rather under performant.

Battery life is reasonable, depending on your activity. I managed to get about 3 to 3.5 hours of Need For Speed Most Wanted out of it before needing to re-attach the charger. The extra half hour will require dialling the brightness right back. You can get a bit more out of it with local video. Close to 4.5 hours if you sacrifice the brightness, 4 if you need to crank it up.

If you’re wondering about auto-brightness, there isn’t a sensor for it! General browsing in Chrome will net you about the same as local video, maybe a shade more. In a day of mixed use you can expect to get about 4 hours of screen on time. Standby time is decent. I didn’t expect any excess drainage or wakelocks although I’m pretty careful with app choices.

With a little bit of effort you can coax a decent image out of the 5MP rear camera. Using HDR helps in the right environment, as it does on pretty much any tablet camera. The front camera does a good job of selfies and video chats too. While I would never choose a tablet camera over a decent smartphone camera there are odd times when you might need to. In those moments this tablet does ok.

The software is straightforward with more options than you’ll likely need. Some useful shooting modes have been included that you’d usually see on smartphones, which is nice. The options aren’t obtrusive and they are easy to find so I’m calling it a good tablet camera experience overall. Below are some images I captured. 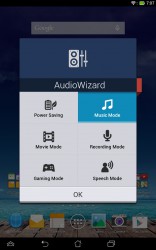 The rear speaker gets reasonably loud while headphone volume is plenty loud. The sound quality overall is good, obviously better depending on your earphone choice. If it’s bass response you want, no tablet does it well, so plug in your earbuds. Asus have handily included an Audio Wizard which I found to be useful. See pic below. The modes worked well to alter the output of various aspects of what you were doing. In game mode however, notifications were kept at bay.

Speech mode did a good job of optimising voices on podcasts and music mode sounded great with music. In a noisy environment you’ll still want headphones for the best result but in quiet environments the rear speaker did well, being a bit louder than my Nexus 7 and having a similar stereo effect. In comparison I think I preferred the MeMO Pad’s speaker overall.

Asus’ approach to ‘skinning’ Android 4.2.2 (Jelly Bean) is fairly minimal, thankfully. The Android settings menu is basically untouched apart from a coat of paint. The Home Screens have a basic Android approach and the App Drawer has just a couple of additions to distinguish your downloaded and most frequently used apps.

I liked how Asus allowed both a ‘stock’ Android approach to the quick toggles and the notifications and also their own skinned approach. If you’ve read my reviews you can probably guess which one I chose.

There are plenty of included Asus apps with varying levels of usefulness. I didn’t try all of them. Those that were useful are mentioned throughout the review. As the tablet doesn’t have a light sensor with which to control brightness automatically, Asus have included their own power optimisation software. After a few days using it I wasn’t sure it was all that effective so I installed Lux and allowed it to use the front camera as a light gathering resource to automatically control brightness.

I tried installing the Google Now Launcher. Just to see how it would go. While I preferred the overall look of it, the launcher tended to require more resources than Asus’ included launcher. A word of caution: Whatever launcher you choose, once you start using additional home screen pages for widgets and the like you can slow down the tablet considerably.

A lesser performing tablet like this is, in my opinion, likely to please prospective owners based mostly on it’s price tag. In Australia, Harvey Norman has the tablet exclusively for $244. This is actually a sale price as the tablet was previously $328. Personally, I think it would be more suited to the $199 bargain bin. Especially when a 2013 Nexus 7 can be had (albeit with a smaller display) for $299 and gives you a much better quality display, performance and an up to date software experience.

If you want to take the plunge Harvey Norman will charge you only $5.95 for delivery here in Australia, taking the total to $250 delivered. If you want to be a bit braver you can shop online at somewhere like BH PhotoVideo and pick it up for only $179 plus delivery. You’ll have to pay $38 for delivery but it still comes in $33 cheaper at $217 delivered.

Yeah I wouldn’t even consider that acceptable let alone reasonable. I guess that’s why they provide a number, one man’s reasonable is another man’s ……….

Apologies, those figures are meant to be ‘screen on’ times in hours. It won’t go flat in 4 hours if it’s just sitting there doing nothing. But yeah, even as screen on times they’re on the low side.

Geoff, straight out of the shrinkwrap, what sort of memory and systems resources hit does this tablet cop?
I recall that being a notable problem on the S5, and am wondering what it’s like on this tablet.

Based on this ‘Asus’ approach to ‘skinning’ Android 4.2.2 (Jelly Bean) is fairly minimal, thankfully. The Android settings menu is basically untouched apart from a coat of paint. The Home Screens have a basic Android approach and the App Drawer has just a couple of additions to distinguish your downloaded and most frequently used apps.’ I’d say close to a Nexus or minimal AOSP build so probably 12 – 13Gb free.

Remember the S5 has double the amount of ram. Also the way Android manages memory is not intuitive. On my SGS2 I could have about half of the available 896mb of memory used after a clean boot, fire up a large application that devs recommend you need minimum 1Gb device to use and it still runs fine. The Android OS obviously quits some of the un-needed Samsung crap that was loaded on boot. TL;dr the available memory stat on Android is not particularly useful as the way Android manages memory it aims to make this number small anyway and only… Read more »

The CPU-Z figures should be pretty close. I usually install and run those diagnostic apps before adding anything else.