The Galaxy S Tab line has begun showing up in press render form, indicating that the event called ‘Tab into Color’ event which Samsung is holding in New York on the 12th of June is where we’ll officially see the tablets launched. We’ve already seen the Galaxy Tab S 10.5, and today we see the 8.4″ version of the Galaxy Tab S line. 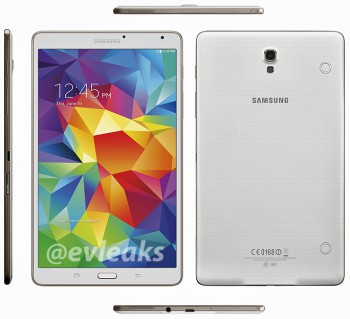 There’s not too much to say here, it’s the same design as the Galaxy S5, scaled up to Tablet form, just like the Galaxy Tab S 10.5. There’s a clearer view of the two dots on the rear which are said to be magnetic attachments for a cover. Go check out the source for two more pics showing angled front and rear shots and join us at 8am on the 13th of June AEST where you’ll be able to watch a live stream of the launch on Samsung Mobile’s YouTube channel

soon people will confuse what is difference between the samsung phone and tablets as they have all the sizes in same design …….