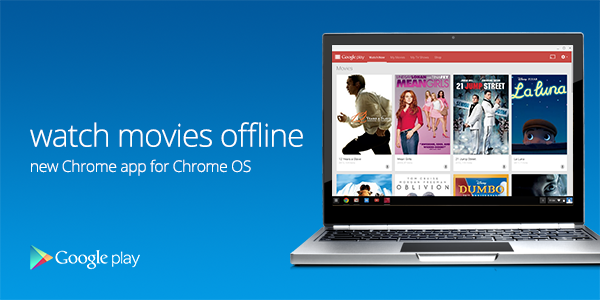 At their recent event with Intel, where a new range of Intel based Bay Trail based ChromeOS devices were launched, VP Product Management at Google, Caesar Sengupta announced that in the coming weeks, an update to Google Play Movies & TV on ChromeOS would allow content to be cached on the device for offline viewing, that day is now here.

If you’re a ChromeOS user, you will of course need to have the Google Play Movies & TV Chrome app installed to be able to use the feature and you can grab it now from the Chrome Web Store.

There’s also more features included in the update, which is available on your Windows and Mac desktop as well, including Info Cards, which recently came to the Google Play Movies & TV Android app. The full list of features in the Chrome App include :

This move by Google to offer a prominent ‘Offline’ feature, is very much needed to dispel the most common myth surrounding ChromeOS devices – that you need to be connected to the Web for them to work. A major hurdle that Microsoft is doing their level best to re-enforce with their ‘Scroogled’ campaign.

Of course, with most ChromeOS devices stuck with a relatively miniscule 16GB SSD inside them, this won’t be much use on an extended flight. At this stage though, in the latest round of device announcements, it looks like 16GB as a standard for ChromeOS devices is here stay.

Grab the Chrome app and make sure you pin all your video content from Google Play before your next trip and see what you think.

With luck, Google will announce an official increase to the minimum size SSD spec for ChromeBooks at I/O.

32Gb would be nice to see be made the official standard.

That was the first thing that came to mind when I read the title.. SSDs in ChromeBooks are relatively small. Still they’re big enough to keep one or two movies and a few TV eps.. maybe a season. I’ll have to check it out it’s been a while since I turned on my Chromebook :/