Home News and Editorial Motorola’s Punit Soni posts a screenshot from a 1080P device and the...

Leaks, they happen for every company, sometimes intentionally, sometimes not. Whether Punit Soni, VP, Product Management at Motorola Mobility was thinking about what he was doing when he posted a screenshot to Google+ showing off a new feature from Android 4.4.3 on the Moto series devices which was from a device running a higher resolution than any in the current Moto line up is unclear.

The screenshot shows off the a new option to turn on or off network names in the status bar in the forthcoming Android 4.4.3 update for Moto devices. 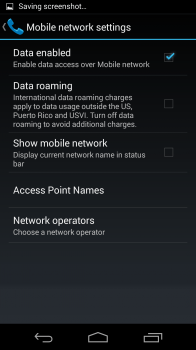 All we know is that Motorola said that the follow up to the Moto X, which is likely to be called the Moto X+1, will be launched in ‘late summer’, so having a working prototype in the hands of the VP, Product Management is a smart move. Hopefully we see the phone announced globally soon and we can find out, exactly what the Moto X+1 will bring.