Home News and Editorial Transparency Report: Protecting emails as they travel across the web

If you ever send a letter by snail mail with Australia Post, you expect that the only person who will read the letter is the person you addressed it to. But as this letter may be handled by multiple people before it reaches it’s final destination, it’s important that to use an envelope to prevent others reading it.

Emails that are encrypted as they’re routed from the sender to the receiver are like sealed envelopes and are less vulnerable to prying eyes such as government surveillance. Some emails are more secure than others, so to explain whether your emails are protected by encryption here’s a a link to a new section on the Google Official Blog in the Transparency Report. 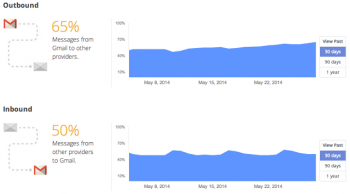 Gmail has always supported encryption in transit by using Transport Layer Security (TLS), and will automatically encrypt your incoming and outgoing emails if it can. The important thing is that both sides of an email exchange need to support encryption for it to work; Gmail can’t do it alone.

Data shows that approximately 40-50 % of emails sent between Gmail and other email providers aren’t encrypted. Many email providers have turned on encryption and others say that are turning theirs on soon. This is great news as more and more emails will be protected from snooping.

If you are looking for even stronger email security, end-to-end encryption is a good option but it is hard to use. However if you are interested here is the source code for End-to-End which is a Chrome extension. It’s currently in testing so proceed with caution.

Here are some other links about choosing strong passwords and adding another layer of protection to your account in Google Blogs Safety Center. You can also check out Reset the Net which is a broad coalition of organisations, companies and individuals coming together this week to promote stronger security practices on the web.

So this all may seem a little complicated to someone who doesn’t already know much about encryption (like me), but take your time (as I did) and read through all the information carefully, and I’m sure it will make sense.