The HTC One (M7) will be receiving an OTA update to HTC Sense 6 today, at least Vodafone handsets will, according to the latest Vodafone Software update blog posted this morning.

Vodafone advises that the update will arrive after 12 o’clock today, but as usual, we assume that Vodafone or HTC will be staggering this update to handsets over the next couple of weeks. The 680MB release brings about a number of changes including :

There’s no need to connect to a PC to receive the update, it’s all over the air, so if you’re connected to Wi-Fi or a mobile (3G/4G) connection you will be prompted to download the update when it’s your turn. If you want to check to see if it’s your turn go to Settings > About Phone > Software Updates and tap ‘Check Now’.

But fear not, Vodafone customers aren’t the only ones due an update with Optus posting an update regarding the HTC One M7 update on their software update page on the 27th of May stating that the next update for the phone would be HTC Sense 6, further adding ‘We expect to complete testing next week.’ and ‘We expect HTC will make it available around Early to Mid June.’ This should hopefully be coming soon for Optus customers.

UPDATE
Miles has advised that the Optus update is now live as well, with his phone receiving the update which includes Sense 6. Miles has kindly provided the following screenshot of the update prompt, which includes a list of features : 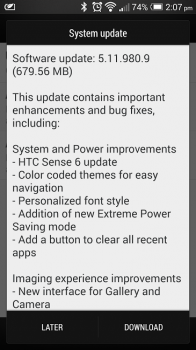 For Telstra customers, the update is not so cut and dried. Telstra lists the next version of Android for the HTC One (M7) as ‘Bugfix only’ on their latest software update forum post, but expected a rollout to begin tomorrow on the 13th of June, so we’ll soon see if this ‘Bugfix’ is HTC Sense 6 or not.

UPDATE
Looks like the ‘Bugfix’ release from Telstra is actually the Sense 6 update. Max has sent us the below sceenshot of his Telstra branded phone downloading the update. 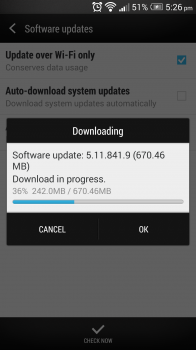 Max has kindly shared these two screenshots showing the update screens in full :

Let us know in the comments if you’ve received the update on your handset and which carrier you’re with, especially if you’re a Telstra customer, it will be interesting to see if this ‘Bugfix’ is indeed Sense 6.

Telstra seem to have insinuated that the bugfix only update will not be Sense 6.

Still havnt got it?
Vodafone

Still havnt got it?

I updated and now I have problems with Google Music not syncing, If you don’t mind your device not having music until they find a fix, which I read somewhere they are looking into it but no idea when the fix will come. I have HTC One (M7) International Brand..

I’m with Telstra, the screen shots Max is showing above has a software update version 5.11 (670.46 MB) ..when I try to update mine shows version 4.20 (307.86 MB) and when download it, it shows the message “Download unsuccessful” ….any one else having the same problem? ..Any ideas how to solve it?
Thanks

If I hold down on the lock screen button and swipe left to go the the ‘main’ home screen, it doesnt take me to my main home screen it always takes me to my left most screen (not blinkfeed), Is this bug/glitch happening to anyone else? it is really frustrating. Anyone know how to fix this issue.

Updated mine last night from Optus. Loving it.

Last update I did for my HTC I couldn’t connect to my wi-fi at home anymore :/

My M7 (unlocked) got the notification when I got into work this morning.

But who did you buy the phone from? That’s what determines your update pathway, not whose SIM card you have in your phone.

Downloading mine (Optus) right now. I have to say that I am impressed with the number of updates HTC has made available to users over the past year for this phone

Same with Optus. Sent tip with screenshot. Have more screenshots of everything it included.

My M7 is on Telstra and I just manually checked, the same update is available for us too!

Just updated mine on Vodafone…started the update at 12:30