We first saw Google TV back in April and today Google finally took the wraps of their fourth (GoogleTV, Nexus Q, Chromecast) attempt at conquering the living room. But it’s more a continuation of what they began with the Chromecast than a full blown platform change.

Dave Burke – Director of Engineering, Android showed off Android TV, saying that with Android TV, Google is giving TV the same level of attention as Tablets and Phones (a slight dig at another platform who list their TV product as a hobby perhaps?). Android TV will be simple for developers in that there will be one Android SDK which will also cover Android TV. The Android TV builds in new framework classes, letting developers build for a ’10 foot experience’. The same APK which works on your phone or tablet will work on Android TV – no more ‘Google TV’ versions in Google Play.

Android TV will be a platform that will run on hardware such as TV’s, as well as set-top boxes, but will add in the addition of gaming to the mix. Android TV will run atop your normal live TV content. You’ll have content laid atop your TV stream if and when you request it – you can perform searches, access apps (Netflix, Plex etc.) as well as games. Android TV will incorporate voice search into the experience using an Android TV app, which is now available through Google Play for your phone or tablet. You will be able to search using voice rather than typing, although it’s highly likely that Google will allow you to type a query as a backup. The voice search will allow you to search for content (eg Game of Thrones) and from the search results allow you to start playback with a single click in Google Play Movies and TV or any related service. Search results will also include ‘Cast’, ‘Related search terms’ and ‘YouTube Clips’ which you can access by scrolling down. This search will also incorporate Google’s Knowledge Graph as well, so you’ll get all that information right on your screen.

Android Wear is also incorporated into the experience with Dave showing off controlling the TV, using his Android Wear watch as a D-Pad. So even if you can’t find your remote, if you have your watch, you can control the TV.

Android TV is a continuation of what Google began last year with Chromecast. Cast function is built into Android TV, so you’ll still be able to cast content to the screen, but Google wants more – and we’re talking about Gaming here.

Google has noted that even though a large number of Android users don’t really identify as gamers, 3 out of 4 android users are playing games. Android TV takes your games to the biggest screen in the house. It includes Game Pad compatibility to make the experience more enjoyable, although no information was given on what game pads will be compatible.

Google Play Games is a bit part of the experience, Achievements and leaderboards as well as Multi-player games are all part of Android TV. Your friend can be playing a multi-player game on their tablet against you, with you playing on the Android TV big screen and the exprience just works. 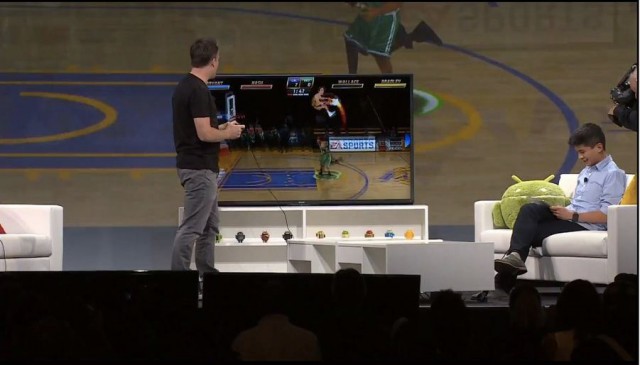 While the apps will just be normal Android Apps, a TV-centric play store experience for ‘Android TV apps’ will officially launch in the ‘fall’ at the same time as the ‘L’ version of Android launches.

Android TV is ideal for multiple device types – TV, set top boxes, gaming consoles – Google is working with chip makers – Qualcomm, Nvidia, MediaTek, Intel, Marvel, Broadcom and more to bring these devices out. Partners already include Sony, Sharp and Philips who have all come on-board to produce Android TV hardware, with PayTV boxes (US only presumably) coming this fall.

Android TV looks very cool, but Google had issues rolling out their initial platform Google TV to more countries. Whether we see Android TV here in Australia is a big question. Philips has limited presence here in the TV retail market, so we will have to see what plans Sharp and Sony have for Android TV later today.

Does Android TV sound like something you could use in your next TV?

hhmm took their time about it… those android hdmi dongles/boxes thingies have been around for a while now. It’s about time they had a good UI specifically designed for TV.

The problem with conquering the living room is that most people don’t update their TV’s anywhere fast enough for this to gain good traction. It really needs to be an add on like the chromecast. Although most of us probably have enough boxes under our TV’s already.

The problem with conquering the living room is that most people don’t update their TV’s anywhere fast enough for this to gain good traction. It really needs to be an add on like the chromecast. Although most of us probably have enough boxes under our TV’s already.

This is what I was waiting for. I was kinda hoping we would see some of the interface on a chromecast because lets face it, Australia seems to be the forgotten child when it comes to cool platforms like this…