Google has entered the car, no not the self-driving car, that’s still a long way off. Google has instead launched Android Auto, a system that will integrate Android from your phone into your car entertainment system. Patrick Brady, Director of Engineering Android took to the stage to show off the Android Auto interface and how it works.

Patrick asked the question ‘Android Wear connects phone to wearable, what if all devices were this connected?’ and that’s just what Android Auto aims to do with one of the largest gadgets in your life – your car. Currently 25% of accidents are caused by people using their phone while driving, the Open Automotive Alliance was created to address this problem and make the connected car a reality.

Android Auto includes an interface which has been redesigned for automotive. The new interface makes it easier and safer to use apps and services in the car, including navigation, communications and controlling your music or other streaming media. The system connects to your car by ‘casting’ the phone to your in-dash entertainment system. All your apps are front and centre, so no need to hunt for the app you want. The system is also completely voice enabled, so you can keep your hands on the wheel and eyes on the road. 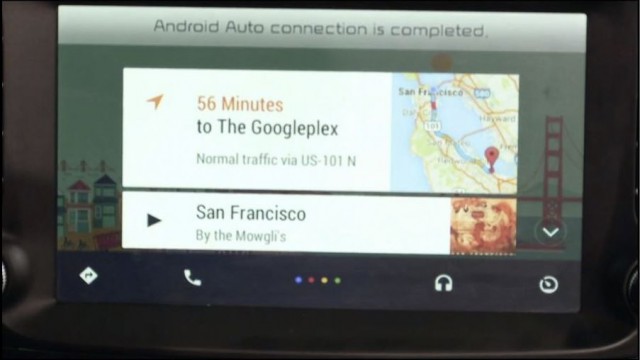 Andy Brenner, product manager ran a demo of the in-car experience using Android Auto. He connected the phone to the car via USB and the phone then ‘cast’ to the in-dash screen. Casting seems to be the key to the Android Auto experience. Apps are on the phone but displayed on the in-car screen.

The music player is simplified to make for an easier to use, glanceable interface which has been specifically adapted for use in the car. 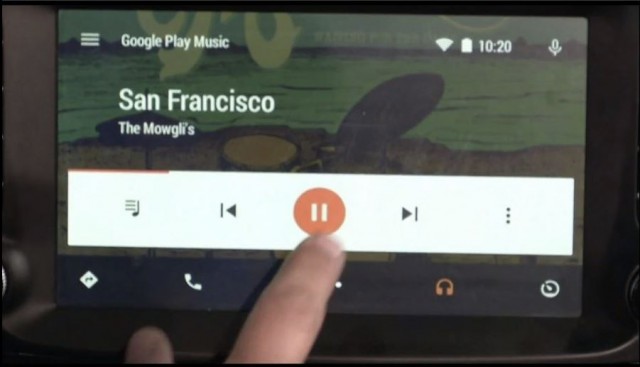 When looking for other ways to use Android Auto, the obvious one is navigation, but Google showed a wonderful way of using Android Auto – Andy demonstrated Google Search, by asking for how late a venue was open, the search returned the opening hours and then he simply said ‘navigate there’ to open Google Maps navigation. 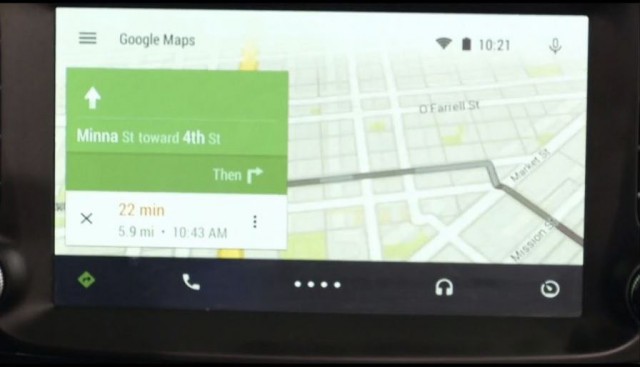 While navigating, the ability to receive and respond to SMS messages. Voice enabled messaging was shown off, a message can be received, read out by the car through the stereo and using a control on the steering wheel a reply can be sent. We saw all this in the Android Wear demos and it works just as well in the car.

For Developers it’s a very easy process. The Android Auto SDK is available today, it includes the ability to incorporate Audio + Messaging applications into it – including POCKET CASTS from Shifty Jelly.

The Open Automotive Alliance includes 40 partners, with 25 car brands signed up to ship out cars in the future. Google advised that the first cars to support the Android Auto platform will be rolling off production lines and into showrooms by the end of this year. At this stage, there has been no word on when this will reach Australian manufacturers so we’ll have to keep an eye out.

I have replaced my car’s head unit with a Samsung Galaxy Tab P1000 built in. I’d rather have that than some sort of CarCast type deal.

Great idea. I’ve been patiently waiting for this feature. It would also be good to see existing car audio makers incorporate this in future head units.

Seems like the right way round to me – keeping the car electronics dumb and putting the smarts in a replaceable, swappable unit (the phone). Also seems like it would be a no brainer to create a double din slot in upgrade to deliver this to any car (not just new). The bit I didn’t hear was the ODB/Torque type of data and the car exchanging its data with the phone, for an app on the phone to do sensible stuff with it, and then cast it back to the screen in the car. Surely they couldn’t be stupid enough… Read more »

Considering the projected dates that what remains of local car manufacturing in Australia will be closing down, I doubt we’ll get to see Android Auto on anything other than fully imported vehicles.