Home News and Editorial Updated: No – Rumour: Is OnePlus about to announce a tablet?

Update: OnePlus has advised EvLeaks that there is no tablet in the works, advising :

No tablet coming out – photo was photoshopped.

– There you have it – Nothing to see here, move along folks.

With the rollout of their debut phone the One well and truly underway, the question has to be asked ‘What’s next for OnePlus?’ and the answer may be a tablet.

@EvLeaks has posted a rumour that the company is working on a tablet as a followup to what has to be one of the most talked about phone launches in a very long time. The source of the leak is this screenshot of the OnePlus website which is apparently a mockup of some sorts, but includes a new, as yet unannounced ‘OnePlus Tab’ next to the One. 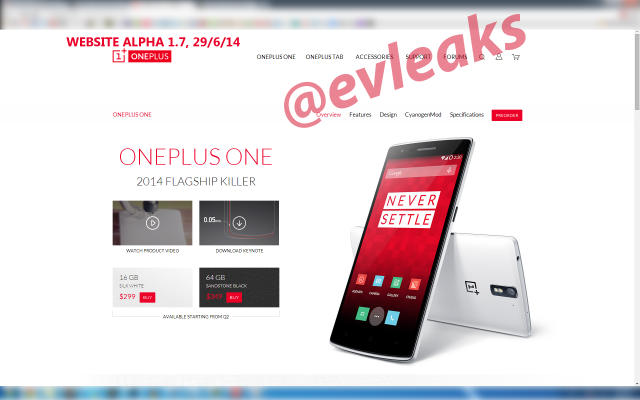 There’s little to go on beyond this screenshot, so no specifications have even been rumoured at this stage. But, with a very nicely specced phone currently on their books for a bargain basement price, the OnePlus Tab could be a real winner.

OnePlus has still yet to actually launch their One Phone in a real sense, with the need for invites still a very real barrier to customers yelling, literally in some cases we’ve seen, for the fledgling company to take their money.

Scott has been reviewing the OnePlus One and should have his review up shortly – along with a giveaway for invites – so keep an eye out for that.

Would you like a OnePlus Tab? What specs would it need to be competitive and at what price?

far too early for them to produce a second device. they are struggling to make enough OnePlus ones. they are not going to shift that focus of making the device available to their fans.