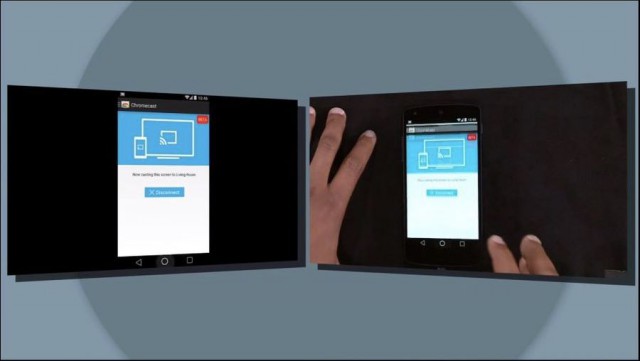 Google announced that Screen Mirroring was coming to Chromecast for Android at Google I/O last month. We’ve been patiently waiting for the Cast Screen function to begin working ever since and today Google has announced that the feature is now ready to go.

You can now mirror the contents of your compatible Android device to your Chromecast by selecting ‘Cast Screen’ from the navigation drawer in the Chromecast app, or more quickly through the Quick Settings menu available by a two-finger swipe from the top of the screen. The catch is that the function is only available from a select few Android devices, these were listed back at Google I/O, but for a refresher, the compatible devices include recent Nexus devices as well as Samsung, HTC and LG devices :

Google does advise that there is ‘support for additional devices coming soon’. The function is rolled up in version 1.7 of the Chromecast app, available on Google Play, which Google advises will be rolling out over the next few days.

The big question is will Foxtel Go mirror over Chromecast or have they blocked it?

Mirroring Foxtel Go worked straight out of the box for me with a Nexus 5 (4.4.3 unrooted. 4.4.4. OTA update not delivered yet).

Expect the dinosaurs to block that in their next update. #sadface

Wouldn’t surprise if it’s the quickest update that those iOS fanboys ever deliver for that app. #cynicalface

No HTC One (M8) compatibility?

I’m sure it’s coming soon but annoying for HTC One M8 owners all the same.

I have 1.5.5 of the app installed on my N4 and 5, nothing showed up but if I rebooted the chromecast it then detected it and worked perfectly. So if you can’t see the button then a reboot of chromecast might be needed.

Tried that too but to no joy.

I bought my chromecast from ebay way before it was released in Australia. Perhaps I’ve got a dodgy one :/

Can you do it the other way round where the TV content is shown on your phone?

I’ve got a Note 3 (4.4.2 not rooted) and there’s no option in my Chromecast to “cast screen”. Am I doing something wrong or will there be an update on the app and the chromecast device that I need to wait for?
Thanks.

I don’t have it on the chromecast app yet, but if I slide down the notification shade and hit the top right, the cast screen is under Aeroplane Mode icon. Today I continued listening to a podcast by casting it, tv screen follows the phone, so hitting the power button blanked the tv screen. Very cool.

Are you referring to the “Sreen Mirroring” ? I’ve tried that too and it doesn’t find anything.

Sorry I have a nexus 5, the cast screen icon appear on this screen i-cdn.phonearena.com/images/articles/116104-image/nexusae0-22-2-thumb.png

Chromecast V1.7.4 update rolled out and arrived for me with this morning’s batch of Play Store updates.

Thanks mate. The update came through yesterday for me too 1.7.4
Works flawlessly now 🙂

I’m excited to get this going, but my Sony TV supports Miracast, I guess that’s going to go the way of the Dinosaur now!
Another little FYI, I’m still running Chromecast 1.5 and I can mirror my screen just fine. Works better than miracast!

Nothing working yet…. S5 can’t find any device to mirror

This is awesome. Now there’s basically no app that doesn’t work. No waiting around for spotify, etc to release a native chrome cast app.