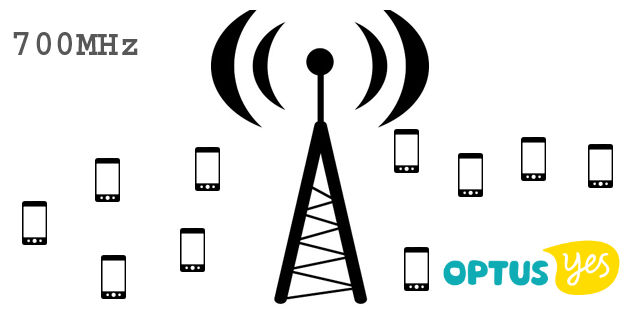 After Telstra announced they would begin trialling a 4G network running on the 700MHz spectrum purchased in the auction last year, Optus has today advised that they too will be running a trial using the same frequency. Optus advised that they will be turning on the 4G 700MHz network in Darwin and Perth CBDs letting their customers trial the network thanks to an early access license from the Australian Communications and Media Authority (ACMA).

When Optus participated in the auction run by the ACMA last year, they spent a total of $650 Million dollars, which got them 2 x 10 MHz (20 MHz) chunks of the 700 MHz band, as well as 2 x 20 MHz (40MHz) in the 2.5 GHz range. The 2.5GHz spectrum will become available for use in most of Australia in October this year, however the 700MHz network will go live in January.

When it does go live, Optus is planning an aggressive rollout, aiming to reach 90% of the Australian population by March 2015. Vic McClelland, Managing Director of Optus Networks, said of the 700MHz trial
‘This brings Optus one step closer to the launch of our national 4G 700MHz network as we bring 4G to more places around Australia. It allows us to move beyond the testing phase into what customers experience on our live commercial network and enables us to deliver an enhanced 4G network experience.’

As with the Telstra trial, Optus advised that their Samsung Galaxy S5 and HTC One (M8) handsets are compatible with the 700MHz network. It would be expected though that the range of compatible handsets will grow once the network goes fully live when the licenses for the 700MHz spectrum go fully effective as of January 2015, and Optus begin their full rollout.

If you use the Optus 4G network in the Perth or Darwin CBD with a Samsung Galaxy S5 and HTC One M8, let us know what you think of the network once it becomes available.

Just look at the Environment EME reports for some towers in Darwin, it shows that Optus is trial out LTE bands on 700mhz, 2100mhz and 2600mhz. Would be interesting to see how this trials turn out.

Well think the trial in Darwin has hit a problem. It was reported two days ago, During a upgrade to towers in Darwin CBD, Some of the customer on optus was not able to make calls or use the internet. The report stated that as of Monday customer it was still not fixed, but Optus was aware of the issue.

Well about time they brought 4G to Darwin. Unfortunately I have a Nexus 5.

That’s annoying. Optus currently only have 4g+ in my area which also doesn’t work on the nexus 5. Looks like even longer using Vodafone.

My nexus 5 used 4g on yango running on optus. I’m on the Sunshine Coast Queensland. Was a blast. Back to Amaysim though. Cheaper and better.

700MHz = Band 28 (not 44, that’s TDD-LTE which isn’t what we’re getting) 2100MHz = Band 1 2600MHz = Band 7 If you only have Optus “4G Plus” then presumably you’re in Canberra, and your Nexus 5 isn’t going to work with any Optus LTE any time soon. (No 2600MHz towers are planned yet for Canberra, it seems.) Vodafone coverage maps suggest fairly solid 1800MHz (Band 3) LTE coverage of Canberra already, and they will probably bring 850MHz (Band 5) LTE to Canberra over the next few months. Those bands are both supported by a Nexus 5. Consider Voda ..… Read more »