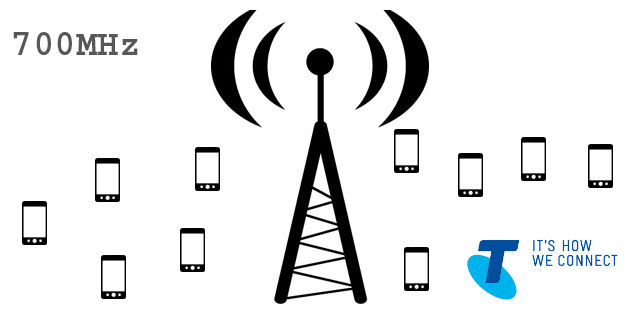 In May last year, Telstra and other carriers participated in a spectrum auction, which saw the countries largest Telco, successfully bid on two 20 MHz blocks (40 MHz) of spectrum in the 700 MHz band. The license to operate on the 700MHz band becomes available in January 2015, however Telstra today advised they have launched a trial of 4G services in the 700MHz spectrum in six locations around the country.

Telstra customers in Perth, Fremantle, Esperance, Mildura, Mt Isa and Griffith will get the first 700MHz experience on the network, before Telstra rolls it out to more locations in January. Like the 850MHz 3G spectrum, the lower frequency allows for excellent building penetration, meaning customers will get great signal inside.

The 700MHz is supported by at least two phones on the network – the HTC One M8 and the Samsung Galaxy S5 – as well as a mobile broadband modem – Telstra Mobile Wi-Fi 4G Advanced Pro X – but Telstra expects ‘A range of new smartphones and other connected devices compatible with 4G 700MHz is expected before the end of 2014 ‘.

Telstra intends to combine the new 700Mhz network and the existing 1800MHz 4G network ‘to serve up ultra-fast data speeds’.

The reason behind the trial, is to test the new frequency in a real-world environment. Mike Wright, Telstra Group Managing Director Networks said
‘The commercial trial will also allow us to test how our use of the 700 MHz band interacts with wireless audio devices that are still able to be used by the community in this spectrum until the end of 2014.’

If you’re a Telstra customer in Perth, Fremantle, Esperance, Mildura, Mt Isa or Griffith and have a Galaxy S5 or HTC One M8, we’d love to hear how it goes when Telstra switches the network on in the ‘coming weeks’.