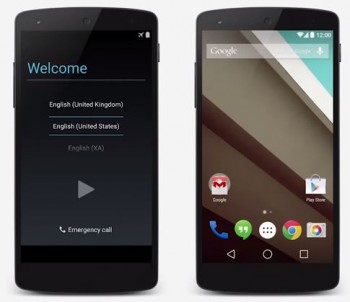 The release of a preview version of the next version of Android – Android L – has set in motion a very promising new way for Google to seek out and destroy bugs before a full launch of a new version is released to the wider Android community. Google Developer Rich Hyndman has spoken about the Android L Preview in a Dev.Bytes video released on the Google Developers YouTube channel.

The video takes you through some of the features included in the L Preview. The L Preview is of course available from the developer.android.com/preview website for the Nexus 5 and Nexus 7 (2013).
The video focuses on some of the more flashier big name features of the Android L Preview :

It’s an interesting video for developers to get a quick look at the L Preview. Very much worth a watch :

Developer Michael Panzer saw the video and shared it on Google+ asking if we would be seeing any updates for the Android L Preview. Host of the Dev.Bye and Googler Rich Hyndman actually replied on that thread :

So, apparently there won’t be any updates to the Android L Preview, at least in the short term.

It would be certainly beneficial for Google to fully adopt an iOS like approach of releasing incremental updates to the next version of Android as we approach the official launch date. But, this is Google’s baby, they have however responded fairly well to public criticism and suggestions in the past. Until we see new images available however, it’s best not to hold your breath.

just wondering what its code name for L :/

Lamington. my bet. you heard it here first 😀

Along with the aussie lamington, we might even get an English (Australia) option in the wizard.

or lime pie? booth seems delicious for me…
you can use morelocale to add your own region…em maybe they should add it for our own sake 🙂

Yeah, on nexus don’t even need more locale anymore, but getting the spelling, voice and keyboard combo right direct from the wizard would be ideal.

good for us *yay*

It would be awesome for them to open it up like Chrome development, have stable, beta and canary, with Android L/Next being the canary branch. A simple option within the developer options could select which branch you receive updates for.