Home News and Editorial Hisense announce the Sero 7 and Sero 8 tablets for the Australian... 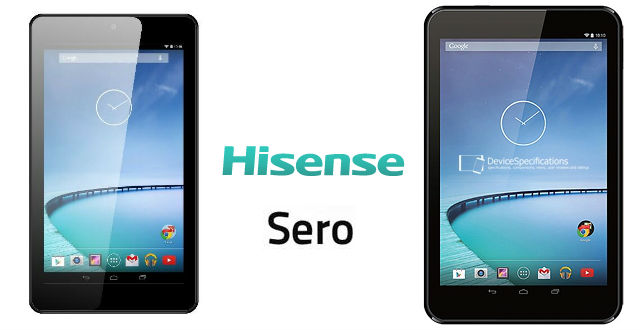 Hisense has announced the followup to their first Android tablet the Sero 7 Pro, announcing two tablets for the Australian market.

Hisense will be bringing a pair of tablets called the Sero 7 and Sero 8, with 7¨ and 8¨ screens to a variety of Australian retailers, and they will be priced to sell. Hisense has advised that the Sero 7 will be priced at $99, while the Sero 8 will be priced slightly higher but still a bargain at $169.

Hisense has dived into Android with gusto in Australia, and indeed around the world. While we’re not going to see their mobiles on our shores yet, we’ve seen one of their tablets last year, as well as their Google certified Android powered VisionTV’s, which launched in May.

Based on this Hisense are definitely all-in on Android, they’ve released their HiShare app which acts as a remote for their Vision TVs. The HiShare app is quite a smooth running experience, offering options to users to control their on-screen cursor on Vision TVs, as well as changing volume and channels and offering a way to ‘cast’media such as pictures, videos and music to the TV.

Andre Iannuzzi, head of marketing, Hisense Australia said of the Sero 7 and Sero 8

Fast processor speed, expandable memory, exceptional battery life coupled with a powerful Android OS is a proven formula for Hisense. We’re bringing tablets with the best possible features customers want, we continue to do that while making them available at a price that’s easy to reach.

And the Sero 7 and Sero 8 tablets, do have some decent specs and features, even with a budget conscious market in mind. Hisense are using the Rockchip processor in both tablets which offer a cost benefit while still supplying a goodly amount of power in Dual and Quad-core configurations depending on which model you opt for.

I would happily pay a little more if only I could have 2-3GB of RAM. Memory prices aren’t that expensive but performance gains would be immense.

It’s great to see Hisense had the good sense not to put a logo on the front. Looks like stock 4.4. Could be a great little budget offering. Hope you guys will be doing a review – especially the 8″.

Look like just generic Chinese made tablets to me. Nothing exciting here and nothing you havent been able to get on Fleabay cheaper for ages.
I would have thought we’d moved past huge black borders by now?

The original Sero 7 Pro really good, and great value, but it had a tegra 3 processor. Not sold on these cheap rockchip processors…

At the price point they’re at they appear to be incredibly good value. Adding a cellular radio to any tablet these days is an exercise in futility, with most of the carriers only really stocking 1-2 tablets.

As WiFi only tablets, I don’t disagree with your assessment on their value.
🙂
For my use, I’ve come to rely on my tablet having 3G data and 3G phone capability, which is why I said that these tablets from the Sero series won’t be on my shopping list.

Jenny, I think you have to realise that the only manufacturers doing 3G or 4G tablets would be either Samsung, LG, Google or Apple. Most manufacturers tend to put out more WiFi only tablets because it is up to $100 to $200 cheaper for the consumer and given that most tablets sell world wide to various markets and to get 3G/4G radios put in that will work around the globe without issues for the user is extremely hard. Hence why we are see more and more WiFi enabled tablets compared to 3G/4G tablets. Given that most people now-a-days tether their… Read more »

Based on @JeniSkunk:disqus’s recommendation last year, I bought one off these Aldi specials for my 11yo daughter. It is still going strong and she loves it. Thanks for the recommendation. Just goes to show that some times, the no name brands perform just as well, if not better, than the name brands.