Home News and Editorial Official 4.4.4 Stock Android for the OnePlus One Most tinkerers, hackers, Android enthusiasts and people who like to live on the edge of stability fell to their knees and thanked their relevant deity when they heard that there would be a phone released with a custom rom onboard. The OnePlus one was a dream for us. CyanogenMod booting up, straight out of the box was something we had hoped for for a long time. So now it seems strange that OnePlus are also releasing an official stock Android 4.4.4 for their “flagship killer”.

OnePlus have released via their forums (and the custom rom download site Android File Host a 4.4.4 rom along with the kernel source and a link for Google apps. Seems unusual for a manufacturer to be promoting the installation of a custom rom on their device but OnePlus have been known to do things differently. At all times they have trumpeted that they are building a phone for phone enthusiasts and this is in line with that ambition. Their announcement explained their reasons briefly:

Today, we’re launching our own version of stock Android for those who want that 100% pure Android feel. We’ve worked hard at this so we hope you’ll enjoy it, but keep in mind it is a work in progress. 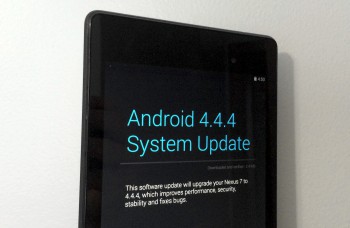 OnePlus even help out with the installation instructions and state that installing the stock rom provided will NOT void the warranty. Refreshing indeed to have a company embrace the developer community as openly as OnePlus are. The rom is installed just as you would any custom rom and if you have not done it before yourself make sure you read all the instructions on the OnePlus forum. I like their addition to the post that they encourage people to avoid toolkits and to learn how to do these things themselves. Wise words that I agree with and try to hammer home every chance I get.

At this stage, there are a couple of known issues such as the gyroscope not working on all devices and the encryption features and VPN may not work but as with most things your mileage may vary. Beware though that there may be other bugs not found yet so if you do decide to jump in and install 4.4.4, do so with both eyes open.

How do you see this development? Do you think that OnePlus needed to do it? Will you put this on your OnePlus One?

They are just likely missing a patch from CM gerrit for gyro.