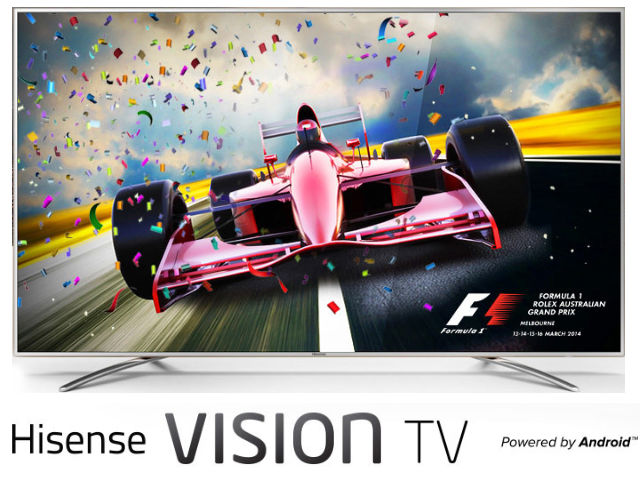 Hisense made quite the splash when they launched their range of Vision TV’s in Australia. They’re the first TV platform running Android that’s been certified by Google to run Android on a TV, this prior to the launch of Android TV as a platform at Google I/O. While their initial offerings have been well specced and priced, they’ve stepped their game up to offer two new models at the higher end of the range, launching their Vision UHD – 4K – models the T910 series in 75″ and 85″.

The T910 series is described by Hisense as ‘retro-futuristic’ with the manufacturer wanting to make their new TV’s the focal point of any room you want to place them in. With a stylish copper coloured bezel surrounding the TV and a contemporary stand they’ve certainly gone in the right direction. If the stand is not for you, the fact that the 85″ model is almost 20% lighter than other UHD TV’s on the market will make wall mounting it a breeze.

Hisense are really getting into the Android market, recently announcing their latest 7″ and 8″ Sero tablets for the Australian market. They’re not just standalone devices either, Hisense really seems to understand what Aussies and indeed the world is doing in the loungeroom – the majority of us are surfing tablets while watching TV. The Hisense experience allows for this and offers an Android App – HiShare – which can control your TV, that is if you don’t want to pick up the wand remote to control the on-screen cursor or use the cool voice-commands which are also picked up by the remote.

You can get the new UHD HiSense Vision TV’s from Bing Lee, Harvey Norman, JB Hi-Fi and The Good Guys. They’re priced pretty well with the 75″ (75T910UAD) model priced at $8,999, while the 85″ (85T910UAD) model will set you back $11,999. Hisense is also helping out our friends in regional markets offering free delivery.

I checked these out a little while ago, don’t bother spending your hard earned coins on them. They’re crapolla!